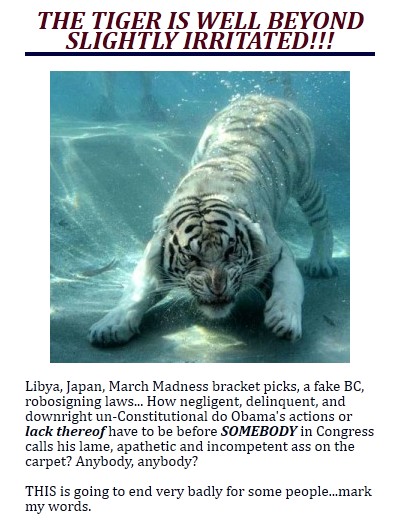 I asked the above question over a month ago and now the candyasses in the District of Criminals are fawning all over themselves for passing  A (one, single) non-binding resolution ‘rebuking’ the sitting poseur in the White House for tearing up the Constitution YET AGAIN with Libya and the War Powers Act.  They want him to ‘explain himself’ or they might just cut off funding for the war? AYFKM?  Which one exactly would they be talking about since they didn’t declare any of them?  And what about the rest of the sh** this assclown has done since well before taking office? END_OF_DOCUMENT_TOKEN_TO_BE_REPLACED

Let’s not even go toward Mitt Romney and his brainchild, the predecessor to Obamacare, Romneycare.  Let’s start with Republicans allowing 300,000 voters from a democratically held district to be moved into Ron Paul’s district and see how long the unsung founder of the tea party holds his seat?  Think Republicans are any better at protecting our liberties and the Constitution than the Democrats?  Think again.  They are all a bunch of assclowns that have graduated from the University Of Global Prickery. END_OF_DOCUMENT_TOKEN_TO_BE_REPLACED