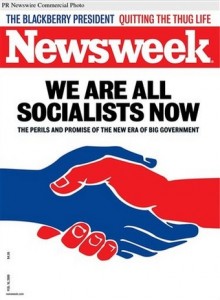 In the February 16 issue of Newsweek (on newsstands February 9), “We Are All Socialists Now,” Newsweek Editor Jon Meacham and Evan Thomas observe that the America of 2009 has become a more socialist country, and the shift began not under a Democrat but a Republican. Plus: how the United States is turning European; the draw of gangs in L.A.; the blackberry president; why Americans don’t hate the rich; and an interview with the Prime Minister of Pakistan. (PRNewsFoto/NEWSWEEK)