Editor’s Note: The Protest against this mosque at Ground Zero is on Sunday.  More information at the end of this article.)

Meet Pat Condell, one of Britain’s top comics who espouses “Godless Comedy” has done a very serious YouTube video about the Mega-Mosque at Ground Zero and the true ramifications of said mosque in said place.

Mr. Condell is an internet celebrity with his YouTube rants about religion, but this particular video involves no comedy at all. In fact, the seriousness of the topic and the common sense put forward is pertinent enough that I have transcribed it.  I recommend that you send this post or copy and paste the transcription into your email lists and help put a stop to the terrorists’ symbol of supremacy over America; Cordoba House – the mosque at Ground Zero.

No Mosque At Ground Zero


All you Americans that have been following the islamization of Europe from afar, with horrified incredulity, if any of you are still nursing the cozy illusion that it could never happen in your country, it’s time to wake up and rub those sleepy eyes because the moment of truth has arrived.

In case you haven’t heard, there’s a plan afoot to build a thirteen story islamic center and mosque a few yards from Ground Zero in New York. A plan that’s been enthusiastically welcomed by politicians and civic leaders, eager to show how tolerant they are at other peoples’ expense. Is it possible to be astonished but not surprised?

Apparently, it’s not enough that nearly 3,000 innocent people had to lose their lives in a hideous act of religious mass murder, but now their memory has to be insulted as well, and the religion that murdered them allowed to build a towering triumphalist mosque on the ground where they died.

Is America losing it’s mind?! It says alot about the people behind this scheme that they have the bad taste even to propose building a mosque in such a place, but to describe it as they have as a tribute to the victims is beyond bad taste, and shows a profound contempt for those who died.  It would be hard to imagine a more provocative gesture short of standing on their graves and burning the American flag.  Yet, how typical of Islam, with it’s own hair-trigger sensitivity to the slightest imagined insult, to do something so arrogant and so insensitive.

It’s gonna cost $100 Million dollars to build this thing, but nobody is prepared to say where the money’s coming from.  We do know that the Saudis fund alot of mosque building in the West, when they are not busy trying to stamp out free speech at the United Nations or telling Fox News what to broadcast, so I guess we’ ll all be paying for it every time we start the car.

You know, it seems to me a much more appropriate place for a mosque in New York would be the United Nations building itself, because that organization has become so islamofriendly in recent years that frankly I’m surprised it doesn’t already have a minaret.

You know, I’m not even American but it makes me sick to my stomach to think that Islam is going to be allowed anywhere near Ground Zero, because 9.11 could never have happened if not for Islam and it’s teachings and it’s doctrine of jihad, and it’s false promise of an impossible afterlife without which none of those gullible lunatics would have been persuaded to carry out such an insane act.  And also because, it wasn’t just an attack on America, but on all of us in the civilized world.  As were the bombings in London, in Madrid, in Barley, the shootings in Mumbai, and everywhere else that the religion of peace decides it doesn’t like the way people do things.

Any religion that endorses violence is incapable of delivering spiritual enlightenment. How obvious does that have to be? And it has no right even to call itself a religion.  Without the shield of religion to hide behind, Islam would be banned in the civilized world as a political ideology of hate, and we have no obligation to make allowances for it anymore than we do for Nazism.  It’s a bigger threat to our freedom than Nazism ever was. Yes, both are totalitarian, and both divide the world unnecessarily into us and them, the pure and the inpure, and both make no secret of their desire to exterminate the jews, but we were all, more or less, on the same side against the Nazis, whereas the islamo-nazis have got plenty of friends among people in the West, who ought to know better.

American politicians now regularily make the kind of dhimmi noises about diversity as an excuse for islamization.  The same kind of thing that we’ve become so depressingly familiar with in Europe.  It’s true that diversity has been good for America; it’s been the making of that country, but American diversity has always been grounded in respect for the values, the individual liberties that make America what it is.  Islam rejects those values and that’s the difference, and it’s a very important difference.

Islam despises what America is; it rejects everything America stands for, including freedom and diversity, and any muslim who denies that, is a liar.

The organization behind this scheme is called “The Cordoba Initiative”, and the building is to be called “Cordoba House”.  And this is because Cordoba or Cordo-ba  is the city in southern Spain where muslims built their first great mosque at the start of, and as a symbol of, their conquest of Spain.  The Ground Zero mosque is intended to serve the same purpose in America.

Building mosques on conquered, sacred ground is standard practice.  It’s what Islam has always done to assert it’s supremacy, and that is what’s happening here.  And, of course, they know how insulting it is, how offensive it is.  Are you kidding?  Why do you think they chose a site as close as possible to Ground Zero, or do you think that that was just an accident?  And they also know that once it’s built, it’ll be there forever as a permanent affront to all Americans, gloating in triumph and a major bridgehead in the ongoing stealth jihad.  That’s how the muslim world will see it, and that’s how they will be encouraged to see it, and to be fair to them, that’s exactly what it will be, confirming what they always suspected, that America is a soft country, a decadent country, crippled by political correctness, confused and guilt ridden with no backbone and no pride.

They plan to open it next year on September the 11th, the tenth anniversary of the atrocity.  Is that tasteless enough for you?  I’m surprised they haven’t organized a 757 flight past.

But you know, it doesn’t have to be this way.  Here in London, we had a similar situation just recently where they wanted to build a gigantic  mosque to overshadow the Olympic Games.  Public Opinion put a stop to that, and Public Opinion can put a stop to this disgraceful plan as well, and it can tell this group, and the politicians that support them that enough is enough, and that this is one insult too far, and that America is a big country and there is plenty of room for them to build their offensive mosque if they have to; somewhere else.  Somewhere perhaps more appropriate to the spirit of their religion, like the Arizona Desert, or Death Valley.

Peace, and God Bless the Kafa(?)

Since I wrote in HUMAN EVENTS on May 14 about the plans to build a giant 15-story mosque and Islamic Center next to Ground Zero, the deceptions and Islamic supremacist intentions of the mosque organizers have become more obvious. Yet Mayor Michael Bloomberg of New York and the New York political establishment refuse to listen to the will of the people.

This why the Stop Islamization of America (SIOA) June 6 rally against the proposed mega-mosque is so important. The Islamic supremacists must not be allowed to do a victory dance on the hallowed burial ground of Ground Zero. They must be exposed and shamed until they withdraw their plans for the mosque.

Bloomberg framed it as a freedom of religion issue: “I think it’s fair to say if somebody was going to try, on that piece of property, to build a church or a synagogue, nobody would be yelling and screaming. And the fact of the matter is that Muslims have a right to do it, too…. What is great about America and particularly New York is we welcome everybody, and if we are so afraid of something like this, what does that say about us?… If you are religious, you do not want the government picking religions, because what do you do the day they don’t pick yours?”

While I agree that that the government should keep its nose out of religion, also believe that if the mayor really believes government should stay out of it, he shouldn’t publicly take one side. But the mayor already has chosen sides, before plans for this mosque became public.

SIOA has called on Bloomberg many times to remove Omar Mohammedi, a lawyer tied to the Hamas-linked Council on American-Islamic Relations (CAIR), from New York City’s Human Rights Commission. Bloomberg keeps him on. And before Times Square jihad bomber Faisal Shahzad was caught, Bloomberg offered his opinion: that the would-be car bomber was probably a right-winger who was upset about Obamacare.

This is why I believe petitions to the mayor are a waste of time. But the June 6 rally will show him that he is on the wrong side of the will of the people because the people of New York know that the mayor is wrong.

This mosque is not about freedom of religion. It’s about insulting America and the victims of 9/11 and establishing an international symbol for Islamic supremacism in New York. The mega-mosque will be the rallying cry for the universal caliphate—a shrine to jihad at the cherished site of Islamic conquest.

And Ground Zero mosque imam Feisal Abdul Rauf is an open proponent of Sharia, Islamic law, a system that denies free speech and the legal equality of all people.
Rauf has also lied about his intentions. First he said that the planned Islamic Center at Ground Zero would contain a mosque; then he claimed it wouldn’t; then he said it would contain a “prayer space.” His wife Daisy Khan admitted that the “prayer space” would be a mosque.

Why the lies? And there’s more. Although he claims that the Ground Zero mosque will become a place for dialogue with Jews and Christians, Rauf has told the Arabic press: “I don’t believe in religious dialogue.” He has told the American media that money for the mosque will come entirely from Muslims here. Then he told the Arab media that funding for the mosque was coming from many Muslim countries. Daisy Khan has insulted the victims of the 9/11 jihad attacks and their families by saying that the mosque is intended to “make something positive out of 9/11.”
SIOA is rallying this Sunday, June 6 (and again on September 10), to call on the mosque organizers to withdraw their plans of the Ground Zero mosque in the interests of mutual understanding and mutual respect.

Read the whole thing and be at Ground Zero — we cannot stop a mega mosque at the burial ground of Ground Zero without you. Stand up for our fallen brothers and sisters. 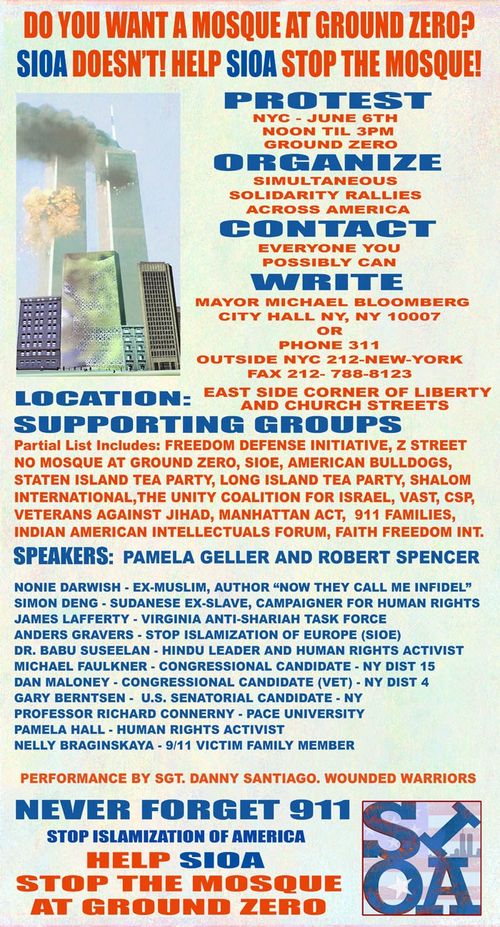 Bad Behavior has blocked 1391 access attempts in the last 7 days.