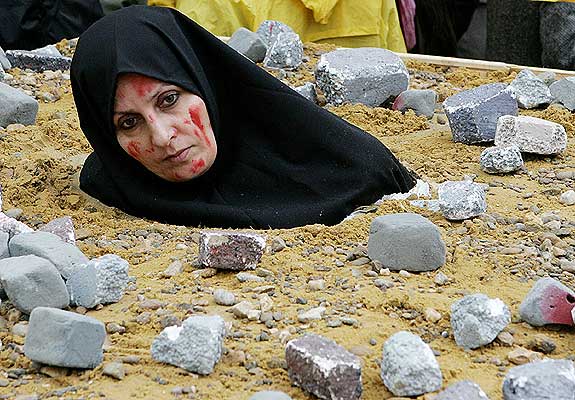 The muslims that are attempting to infiltrate and influence the direction of America are using the progressive tactic of ‘nudge’ using our own principles against us.  The end result will be sharia law and the death of America as we know her.

This New Yorker explains the outward and private reaction of American muslims in the aftermath of the Twin Tower attacks.  Muslims are required by their religion to befriend non-believers for security and to ‘smile in their faces, while they curse them in their hearts.’  I urge you to watch the entire video, and then support SOIA in the battle to keep Islam from marking their territory with a mega-mosque at Ground Zero.

“We don’t have a religious center here in the United States of America, but we do have an economic center.  The heart of that economic center was the World Trade Center which was destroyed by muslims.  And now muslims want to construct a massive mosque.  Why?  To honor the victims of 9.11?  Keep in mind that this was in the mind of muslims all along.  Right after the September 11th attacks, muslims were joking about filling the city with mosques.  And now they tell us they are doing it to honor the victims of 9.11.  Smiling in our faces, while cursing us in their hearts.

911 Mosque: Iraqi Muslim Columnist in Arab Media Warns of “Cordoba Initiative” — “Name Chosen for the Planned Ground Zero Cordoba Mosque Symbolizes Dreams of Expansion and Invasion of the Territory of the Other”

Iraqi Columnist in Arab Liberal Online Daily Elaph: The Hostile and Provocative Name Chosen for the Planned Ground Zero Cordoba Mosque Symbolizes Dreams of Expansion and Invasion of the Territory of the Other

Iraqi-American columnist Khudhayr Taher published an article in the Arab online liberal daily Elaph.com on May 18, 2010 in which he warns against the desire to turn the U.S. into a Muslim country. Taher called upon the American administration to ban the building of mosques, and especially the Cordoba Mosque, planned for construction near Ground Zero in New York, because, he says, these mosques pose a danger to the security of the U.S. as they are centers for spreading extremist and terrorist ideas.

Following is a translation of excerpts from the article:

“In these days, the issue of the Muslim decision to build a mosque near the place where the crime of the cowardly September 11 terrorist attacks took place has come up. We must note that a hostile and provocative name [Cordoba] has been chosen for this mosque. It is well known that the first Cordoba Mosque was built by Muslims in a city in Spain, after they occupied this Christian country, killing its men and capturing its women to bring them to Arab countries as slaves and servants to serve their sexual pleasure. The Arabs and Muslims have never ceased to take pride and bask in the glory of this imperialist history, which they consider to be a symbol of their strength and power, and they are unashamed of the fact that the annals [of their history] are full of shameful crimes.

“Today, it seems as though some Muslims in America are enamored of the dream of bringing back this ugly imperialist Muslim history, which is based on occupying peaceful peoples, on trying to force them to change their religious beliefs by the sword, on killing the men, and on abducting the women from their homes and bringing them to their own countries. Choosing the name ‘Cordoba House’ for the mosque to be constructed in New York was not coincidental or random and innocent. It bears within it significance and dreams of expansion and invasion [into the territory] of the other, [while] striving to change his religion and to subjugate him…

“New York has many mosques, for Sunnis and for Shiites. Of course there is a significant infiltration of extremist terrorist ideology among some of the Sunnis, and likewise there is a significant infiltration of the Iranian intelligence [apparatus] among some of the Shi’ites. This infiltration, both among the Sunnis and among the Shi’ites, has spread across the U.S. New York State has many mosques, and doesn’t need any more of them – not to mention that for work reasons Muslims do not attend mosque every day, but only on Saturdays and Sundays. Therefore, the Muslims have no real need for the construction of this mosque, which constitutes a provocation against the sensibilities of the Americans and a reminder for them of the Muslim imperialism in Spain and of the acts it committed against the Christians – such as murder, pillage, taking captives, and aggression against women.

“As a Muslim and as an American citizen, I hope that the U.S. government will issue a decision to confiscate the funds designated for the construction of this mosque, and to transfer them to a budget for rebuilding the towers of the World Trade Center in New York, [and also to] ban the building of [additional] mosques in the U.S., because there is no real need for them. Also, [we must] take into account the danger that they [i.e. the mosques] pose because they are hothouses for extremist terrorist ideology and for hatred of the other, and because they carry out open missionary activities considered a violation of the freedom and religion of others.”

I just remembered the Taliban blowing up the Buddha statue, and found this article to go along with the image. 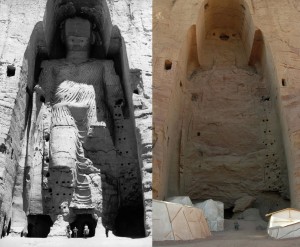 The Taliban were assisted by Saudi/Pakistani engineers in the destruction of the ancient Bamiyan Buddha statues. Al Jazeera was the only outfit permitted to film the destruction. (If anyone has the original video please link to it). Almost all the videos of the demolition we found online were jihadi propaganda videos celebrating the event.

If you want to follow a religion of peace that does not kill in the name of God, maybe Buddhism is for you.

Bad Behavior has blocked 2005 access attempts in the last 7 days.