Be On The Lookout For Arizonans In Sonora

Oh, you are gonna love this one…and we know which side of the line ‘The Arizona Republic’ sits on. 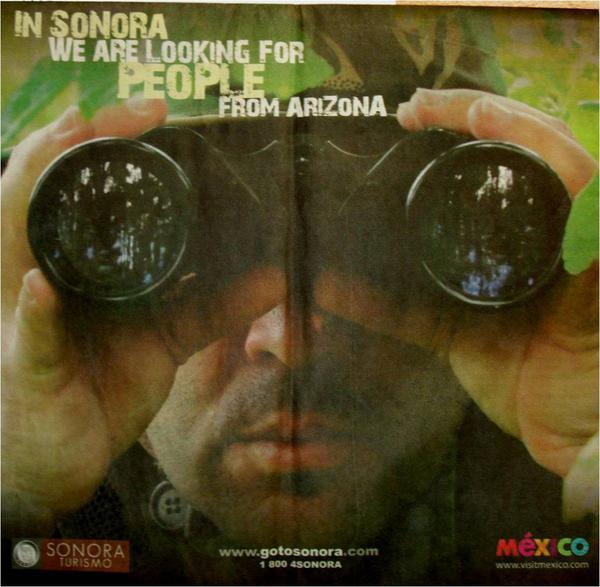 PHOENIX – An advertisement in the Friday edition of The Arizona Republic is raising some eyebrows.

The ad, sponsored by VisitMexico.com, shows a close up of a man with binoculars with the caption reading, “In Sonora, we are looking for people from Arizona.”

“Are you going to racial profile me in Mexico, am I going to jail for two years in Mexico for violating the immigration laws in Mexico, will I be safe in Mexico,” Arpaio asked.

From RedState (in case you missed it a few days ago):

You can’t make this up. On the heels of Eric Holder condemning Arizona’s SB 1070, which he HASN’T READ, comes a verbal lambasting by Sonoran officials. A delegation from the border state recently traveled to Tucson where, whining (in Spanish), they explained that the law “will have devastating consequences.” Returning countrymen will apparently burden schools, compete for jobs, stress social services, and cease the practice of sending dinero across the border to benefit their economy.

This from representative Leticia Amarano-Gamez (in Spanish): “How can they pass a law like this? There is not one person living in Sonora who does not have a friend or relative working in Arizona. Mexico is not prepared for the tremendous problems it will have as more and more Mexicans working in Arizona and sending money to their families return to hometowns without jobs. We are one family, socially and economically,” she said of the people who reside in Arizona and her state.

She is nuts. We are not “one family.” To be outraged that their own citizens will cease to burden their neighbor and, in turn, transfer those burdens to themselves, is muy loco. How do you say, “What’s good for the goose is good for the gander” in Spanish? It’s high time we redefined “logic” and did so in American terms.

Bad Behavior has blocked 1707 access attempts in the last 7 days.