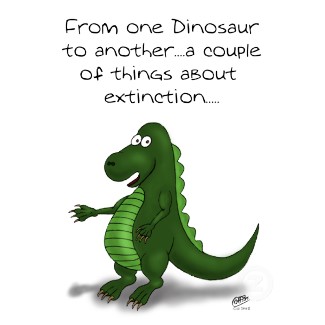 Day 19 of Deepwater Horizon pumping crude into the ocean.

What happens when the oceans die?

I’m so glad a so-called constitutional professor who had to go to a correspondents’ dinner instead of respond to what could be a planet killer is in charge of the federal government and it’s myriad of scientists and ejumacated peoples.  I know I have been sleeping better since this incident has been allowed to run it’s course.

New scale of disaster looms in Gulf of Mexico

NEW ORLEANS, Louisiana (AFP) – Concern grew Sunday that the US Gulf coast is facing a whole new level of environmental disaster after the best short-term fix for a massive oil spill ran into serious trouble.

BP’s giant containment box lay idle on the seabed as engineers furiously tried to figure out how to stop it clogging with ice crystals.

The British energy giant, which owns the lion’s share of the leaking oil and has accepted responsibility for the clean-up, has tried to banish the notion that the dome is a “silver bullet” to end the crisis.

But should efforts fail to make the giant funnel system effective, there is no solid plan B to prevent potentially tens of millions of gallons of crude from causing one of the worst ever environmental catastrophes.

Untold damage is already being done by the 3.5 million gallons estimated to be in the sea so far, but the extent of that harm will rise exponentially if the only solution is a relief well that takes months to drill.

Admiral Thad Allen, head of the US Coast Guard, suggested they were considering what he called a “junk shot” to plug the main leak.

“They’re actually going to take a bunch of debris, shredded up tires, golf balls and things like that and under very high pressure shoot it into the preventer itself and see if they can clog it up and stop the leak,” Allen, who is leading the US government’s response, told CBS’s “Face the Nation.”

This could be risky as experts have warned that excessive tinkering with the blowout preventer — a huge 450-ton valve system that should have shut off the oil — could see crude shoot out unchecked at 12 times the current rate.

There are also fears the slick, which covers an area of about 2,000 square miles (5,200 square kilometers), could be carried around the Florida peninsula if it spreads far enough south to be picked up by a special current.

“If this gusher continues for several months, it’s going to cover up the Gulf coast and it’s going to get down into the loop current and that’s going to take it down the Florida Keys and up the east coast of Florida,” warned Florida senator Bill Nelson.

“You are talking about massive economic loss to our tourism, our beaches, to our fisheries, very possibly disruption of our military testing and training, which is in the Gulf of Mexico,” he told CNN’s “State of the Union” program.

The BP-leased Deepwater Horizon rig sank some 50 miles southeast of Venice, Louisiana on April 22, two days after an explosion that killed 11 workers.

The riser pipe that had connected the rig to the wellhead now lies fractured on the seabed a mile below spewing out oil at a rate at some 5,000 barrels, or 210,000 gallons, a day.

Sheen from the leading edge of the slick has surrounded island nature reserves off the coast of Louisiana and tar balls have reached as far as the Alabama coast, threatening tourist beaches further east.

Sealife is being affected in a region that contains vital spawning grounds for fish, shrimp and crabs and is a major migratory stop for many species of rare birds.

The 2.4 billion dollar Louisiana fishing industry has been slapped with a temporary ban in certain areas due to health concerns from theoretically polluted fish.

BP, facing a barrage of lawsuits and clean-up costs soaring above 10 million dollars a day, had pinned its hopes on a 98-ton concrete and steel containment box that it lowered successfully 5,000 feet (1,500 meters) over the main leak.

“I wouldn’t say it’s failed yet,” chief operating officer Doug Suttles said on Saturday. “What we attempted to do last night didn’t work because these hydrates plugged up the top of the dome.”

Clearing out the slushy crystals is easy — the chamber just has to be raised to warmer levels, Suttles told reporters. Keeping the crystals out so that a pipe can be lowered into the dome to suck the oil to a waiting barge is another matter.

BP began drilling a first relief well one week ago, but that will take up to three months to drill — by which time some 20 million gallons of crude could have streamed into the sea and ruined the fragile ecology of the Gulf.

Rough seas last week hampered efforts to skim the oil from the sea with boats and controlled burns.

13 Days between the explosion and when the fraud went to Louisiana. 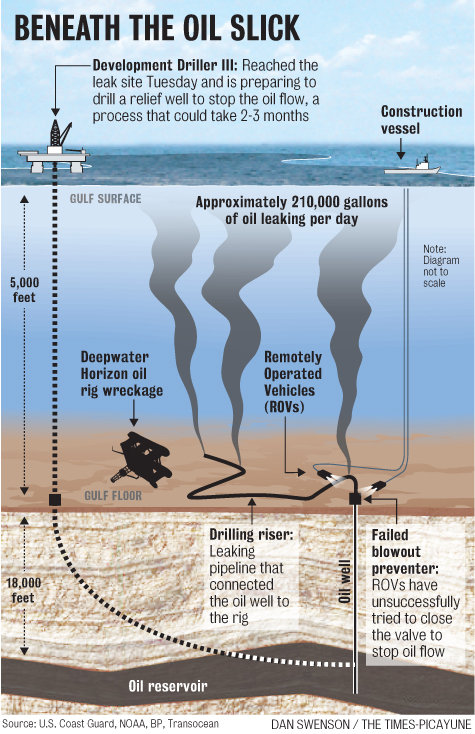 The worst-case scenario for the broken and leaking well gushing oil into the Gulf of Mexico would be the loss of the wellhead currently restricting the flow to 5,000 barrels —  or 210,000 gallons per day.

“Typically, a very good well in the Gulf can produce 30,000 barrels a day, but that’s under control. I have no idea what an uncontrolled release could be,” said Stephen Sears, chairman of the petroleum engineering department at Louisiana State University.

Minerals Management Service data indicates that the deepwater Thunderhorse production platform, also owned by BP, has produced up to 150,000 barrels per day.

Thursday, federal officials said they were preparing for the worst-case scenario but didn’t elaborate.

Kinks in the piping created as the rig sank to the seafloor may be all that is preventing the Deepwater Horizon well from releasing its maximum flow. BP is now drilling a relief well as the ultimate fix. The company said Thursday that process would take up to 3 months.

“I’m not sure what’s happening down there right now. I have heard there is a kink in what’s called the riser. The riser is a long pipe that connects the wellhead to the rig. I really don’t know if that kink is a big restriction. Is that really a big restriction? There could be another restriction further down,” said LSU’s Sears.

“An analogy would be if you have a kink in a garden hose. You suspect that kink is restricting the flow, but there could be another restriction or kink somewhere else closer to the faucet.”

BP Plc executive Doug Suttles said Thursday the company was worried about “erosion” of the pipe at the wellhead. A new leak in that piping was discovered Wednesday, suggesting the erosion is worsening.

Sand is an integral part of the formations that hold oil under the Gulf. That sand, carried in the oil as it shoots through the piping, is blamed for the ongoing erosion described by BP.

“The pipe could disintegrate. You’ve got sand getting into the pipe, its eroding the pipe all the time, like a sandblaster,” said Ron Gouguet, a former oil spill response coordinator for the National Oceanic and Atmospheric Administration.

“When the oil is removed normally, it comes out at a controlled rate. You can still have abrasive particles in that. Well, now, at this well, its coming out at fairly high velocity,” Gouguet continued. “Any erosive grains are abrading the inside of the pipe and all the steel that comes in contact with the liquid. It’s essentially sanding away the pipe.”

The formation that was being drilled by the Deepwater Horizon when it exploded and sank last week is reported to have tens of millions of barrels of oil. A barrel contains 42 gallons.

“The loss of a wellhead, this is totally unprecedented,” said Gouguet. “How bad it could get from that, you will have a tremendous volume of oil that is going to be offgassing on the coast. Depending on how much wind is there, and how those gases build up, that’s a significant health concern.”