I wanted to drop a few notes about the ‘recovering economy’ lie that is being touted.  First, this site is going to continue to go a bit sideways as I am working on posts that are all financials based and you know how TPTB really hate it when we aren’t talking about oil spills, terrorists, illegal aliens, and left vs. right.  When one tries to explain that Goldman Sachs runs the government and not the other way ’round, or Greece is collapsing everything hits the fan. (As I write this, my host is running Emergency Maintenance because of problems.)

One coming attraction that should really set the world ablaze is the statement I heard today on ‘Your World’ that Bambi is going to say tomorrow that he will veto any financial reform legislation that threatens the independence of the Federal Reserve.  Wow – that’s a newsflash, isn’t it.

More importantly, how many have noticed that the reports of bank seizures have taken a remarkable dive in the MSM?  I’m sure MarketTicker has noticed, and I have to wonder what odds he would give on seven banks being seized the same day in only one state, that being Illinois on April 23rd, 2010?

In 2008, a total of 25 banks failed with 20 of those banks failing between July 11th and December 12th – this during the height of the Federal Reserve, Treasury, and Congressional freakout.  In 2009, a total of 140 banks failed during the entire year; with an average of just over 11 banks a month.  I just took a look at the FDIC Failed Banks List again, and we are currently at 64 banks in the first four months of 2010; an average of 16 banks per month.

You and I both know that banks failing on an every increasing rate is a trend in the wrong direction.  Still confused by how Goldman Sachs, BofA, and the other usual suspects can be okay and paying out huge bonuses?  TARP and $1 Trillion in undeclared bad assets kept off the books. If you have not taken the time to watch the vids of Professor Black and how the big banks behind the Fed screwed America, and are taking us down right now; you may want to git-r-done.

Part 3:  The continuing cover-up of the unreported losses by using red crayon math accounting practices.  Mr. Black explains that there is “no accident that there are no indictments, much less convictions of the senior insiders that drove these liars loans”.  This particular crisis is at least 30% greater than the S&L crisis and we have less than 1/6th of the resources used then applied to this crisis.  He also covers the the upcoming financial reform legislation, the silliness surrounding the bills, and the fact that the only entity that hates consumers and loves banks more than the Treasury is the Fed.  Imagine that.

Back to the issue at hand.  I saw the breaking business news reports about pending home sales increasing by 5.3%, and personal income and spending increasing that infer the recovery is happening, but then I add the banks and PIIGS together and realize we are walking the knife edge and are bleeding out.

Stocks in US, Europe slump as fears of debt contagion from Greece worsen; Dow drops 225 points

NEW YORK (AP) — Stocks plunged around the world Tuesday as fears spread that Europe’s attempt to contain Greece’s debt crisis would fail. The euro fell to its lowest point against the dollar in a year.

Stocks have seesawed in the past week as European countries’ efforts to agree on a bailout package for Greece proceeded in fits and starts. An agreement finally came together over the weekend, but its ballooning size of $144 billion has investors worried that Europe would have an even tougher time assembling an aid package if a larger country such as Spain or Portugal were to get in trouble. Traders are concerned that problems in Greece and other countries could spill over to the rest of Europe and in turn, the U.S. 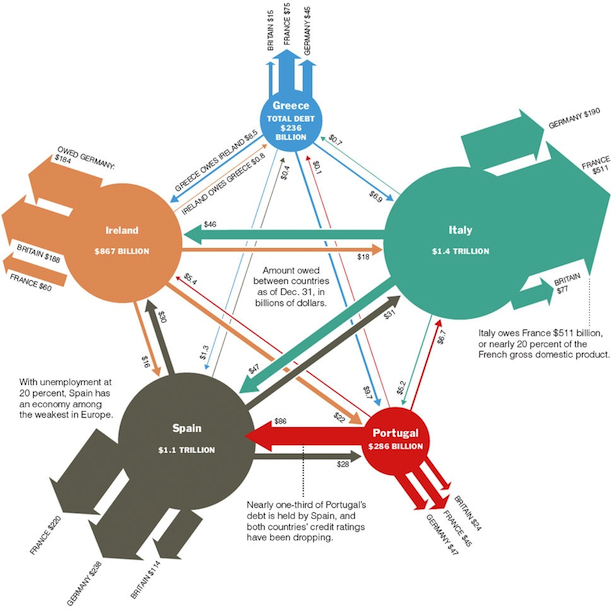 I KNOW there is a lot being thrown at us all at once on purpose. I know this, but folks, you have to pay attention to the actual signs of the underlying foundation of the economy and not the little trends being reported on the MSM. Where is unemployment still?

You may want to invest in the book ‘Aftershock’ (top of the sidebar) if you still have the eagles to rub together and want to prepare yourself for the next year of rollercoaster rides.