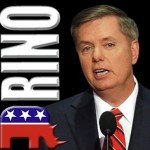 I don’t know about all of my readers, but I am sick to death of politicians playing with peoples’ lives in hopes of building a big enough base to get re-elected.  The latest is Lindsey Graham and Harry Reid pulling shenanigans surrounding illegal alien immigration and cap and death. Can’t any of these asshats do anything for the right reason and with the proper intent?

When Senate Majority Leader Harry Reid decided that he would bump climate-and-energy legislation behind immigration reform as his next priority, Sen. Lindsey Graham (R-SC) was apoplectic. Graham, along with Sens. John Kerry (D-MA), and Joe Lieberman (I-CT), had spent months drafting a climate/energy bill, and was prepared to introduce it Monday, when, enraged by Reid’s plan, he backed out.

Earlier today, Reid appeared to reverse course, saying climate/energy would be the next logical issue to address, followed only afterward by immigration reform. So everything’s groovy, right?

Far from it. Tonight, Graham told me that he will filibuster his own climate change bill, unless Reid drops all plans to turn to immigration this Congress.

“Immigration was interjected before we rolled out the [climate and energy] bill not because anybody’s serious about passing it, but because Harry has got a political problem with the Hispanic community,” Graham told me tonight. “It makes the heavy lift of energy and climate impossible and everybody knows that.”

Graham has said for days that he’s dropped out of climate/energy talks, but pressed tonight, he said that he will filibuster his own bill if Reid tries to bring it up without tabling immigration altogether.

“If they can do this without me, go ahead…. I am not going to be part of an energy-climate process that has no hope of success,” Graham said. “I am not going to let that happen with my vote.”

That complicates things for Kerry and Lieberman, who hoped bumping their climate bill back into the lead would be enough to settle the dispute.

Graham counts himself a supporter of immigration reform in principle, but says that, in the wake of the partisan row over health care reform, he now takes the long view: a goal that may be attainable in President Obama’s first term, but not now.

He isn’t stopping this because illegal alien immigration goes against the ‘rule of law’, but because it’s politically expedient to keep the Democrats from gaining millions of new voters this year.

“What we ought to do this year is address what people in Arizona are concerned about, which is a broken border,” Graham said. “We should work together this year to try to find a pathway forward, because the 2007 bill is not going to make it.” But comprehensive reform will have to wait until next Congress at the earliest.

I asked him how he imagined immigration would pass in 2011 or 2012, particularly with Republicans poised to gain seats in the 2010 election.

“My belief is the Republican party will, like we did in the past…embrace comprehensive immigration reform when they think politically it’s possible to do so,” Graham said. (emphasis mine)

Graham has got to go!  What’s the point of passing laws that state crossing the border is a criminal act if you aren’t going to enforce them, and then are going to just allow the lawbreakers to make themselves at home feasting on the carcass of what used to be America?

Bad Behavior has blocked 1435 access attempts in the last 7 days.