Obama In Quincy Calls Out SWAT 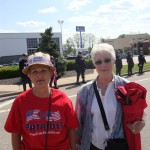 pResident Dingbat was in Quincy, IL today on his jobless tour with, more than likely, another fake audience. The Quincy Tea Party showed up to let him know what they think and Bambi decided to call the goons out on them because of the possibility of violence (ya know, being tea party patriots, racist, over 65, and breathing). If you don’t think you live in a police state right now, you better wise up quick.  This level of paramilitary presence has been around for years, there just hasn’t been a reason to see it until now.