Obama Does Another Fake On The VAT 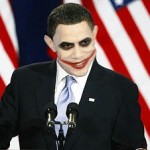 We did not want the bailouts, the takeover of the car companies, the porkulus, the budget, and healthcare because we knew we could not afford it. They passed these immense amounts of spending anyway; “because they had to”. Now Barry is attempting to be ‘not-so-much’ for something before he crams this down our throats right after healthcare.

We must flip this congress and neuter this Europe emulating freak before he plunges us into a morass that we will have a very hard time extricating ourselves from.  Do not let yourselves be led astray when they say this new VAT is to pay off the deficit or the debt.  How many times have they lied to us in the past?  It is just another revenue stream.

Obama suggests value-added tax may be an option

WASHINGTON – President Barack Obama suggested Wednesday that a new value-added tax on Americans is still on the table, seeming to show more openness to the idea than his aides have expressed in recent days.

Before deciding what revenue options are best for dealing with the deficit and the economy, Obama said in an interview with CNBC, “I want to get a better picture of what our options are.”

In the CNBC interview, Obama said he was waiting for recommendations from a bipartisan fiscal advisory commission on ways to tackle the deficit and other problems.

When asked if he could see a potential VAT in this nation, the president said: “I know that there’s been a lot of talk around town lately about the value-added tax. That is something that has worked for some countries. It’s something that would be novel for the United States.”

“And before, you know, I start saying ‘this makes sense or that makes sense,’ I want to get a better picture of what our options are,” Obama said.

He said his first priority “is to figure out how can we reduce wasteful spending so that, you know, we have a baseline of the core services that we need and the government should provide. And then we decide how do we pay for that.”

The powers of the federal government have been thoroughly enumerated even though the Congress and the White House seem to be totally ignorant of what those powers actually are.