Obama Hobbles Us As Russia Makes The World More Dangerous 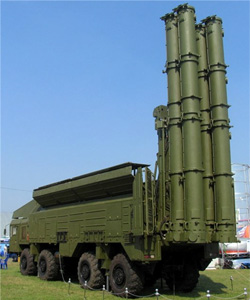 It’s a new day, a new Monday, and I am waiting to see what Obama and his henchmen have in store for us after his Sunday golf game.  Meanwhile, I have some very bad news.  On March 25th, barely two weeks before Obama took nukes off the table, Russia decided to unveil their Club-K Missile System.  Yeppers, it’s gonna be a rough week, and you are going to be able to ask that long standing question one more time, “Is Obama Too Stupid Or Too Dangerous To Serve?”

From Russia with Love: Death in a Box

Media ignore the disasters, praying they will go away, but two effects of White House foreign policy are already on display this week. Traffic jams caused by Washington’s ballyhooed “Nuclear Summit” are missing two motorcades. It seems that Britain’s Prime Minister Gordon Brown and Israeli Prime Minister Benjamin Netanyahu have something better to do than meet with the Obama administration. Oh dear.

But the White House soldiers on anyway, heedless of these unfortunate setbacks. After all, there is that wonderful Nuclear Policy Review in which the Obama administration promises they will not nuke any nation that attacks the United States with biological or chemical weapons, as long as the attacker has signed the Non-Proliferation Treaty. What a relief for Iran, Syria, and Islamic terrorists everywhere! And then there is the new START treaty with Russia that the White House plans to use to eviscerate our nuclear arsenal. Fortunately, an event took place that should help the Senate decide whether or not to ratify START; a Russian company just announced they are ready to sell a deadly new cruise missile system on the global market – the Club-K Container Missile System. (emphasis mine)

What is it? Simple. It is four cruise missiles and a launch system packaged in a standard 40-foot shipping container. These are the containers you see on ships in every major harbor, on railroad flatcars, and rolling down our highways on flatbed trucks. The graphic below shows a small commercial ship, like hundreds of such vessels near American shores right now. This one has a Club-K container on board. You can see that the top of the container has folded open, and the four missiles are erected in their launch tubes. If that image does not make your skin crawl, then go to the Russian company website and watch a video that shows the system in action. 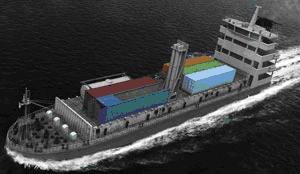 The animated movie shows the Club-K System in action. To the strains of “Born Free,” a beautiful nation of palm trees and beaches is seen loading shipping containers on ships, trains, and trucks to be sent to a nearby country. The neighbor is shown in somber shades of gray. Once they arrive at the launch positions the shipping containers open, the cruise missiles are boosted out of the launch tubes and travel hundreds of miles to destroy the gray neighbor’s tanks, planes and ships. The missiles shown in the video are armed with conventional warheads, not nuclear weapons. But what if they were carrying nuclear warheads? And what if, in a different movie, just one of those containers was put on a commercial ship that was sent to our Atlantic coast? Or to our Pacific coast, or the Gulf, or the Great Lakes? To find it, the Coast Guard and Navy would have to be very lucky indeed. But there is an even worse scenario.

In support of his various policy reviews, treaties, and summits, the Obama administration says the most dangerous threat facing the world today is terrorists armed with nuclear weapons. But the likelihood of terrorists building or even stealing an atomic bomb is remote. It is much easier for them to get anthrax, nerve gas, or radioactive dust from spent nuclear power plant fuel rods. With the pin point accuracy of a single Club-K Container Missile System they could easily kill tens of thousands of Americans, and make the hearts of four major cities uninhabitable for decades. It is likely we would not know who fired the missiles until long after Americans died. We might never know who did it, especially if the attackers sank the small cargo ship right after launching the attack.

The jihad warriors of Islam are planning to kill Jews and Christians and all infidels who do not submit to Shariah law. They tell us that every day. Perhaps one of them is in Moscow right now, walking into number 29 Entuziastov Avenue. The sales manager of Concern Morinformsystem-Agat will be happy to show him the latest model of the Club-K system.

FamilySecurityMatters.org Contributing editor Chet Nagle is a Naval Academy graduate and Cold War carrier pilot who flew in the Cuban Missile Crisis. After a stint as a navy research officer, he joined International Security Affairs as a Pentagon civilian – then came defense and intelligence work, life abroad for 12 years as an agent for the CIA, and extensive time in Iran, Oman, and many other countries. Along the way, he graduated from the Georgetown University Law School and was the founding publisher of a geo-political magazine, The Journal of Defense & Diplomacy, read in over 20 countries and with a circulation of 26,000. At the end of his work in the Middle East, he was awarded the Order of Oman in that allied nation’s victory over communist Yemen; now, he writes and consults. He and his wife Dorothy live in Virginia.

Bad Behavior has blocked 1689 access attempts in the last 7 days.