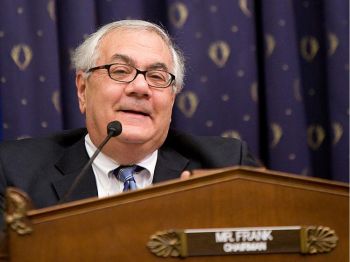 All one ever has to do is follow the money with politicians to find the cover-up.  Judicial Watch has the newest ethics ‘problem’ story.

When Barney Frank was asked about intervening on behalf of a home state bank for Troubled Assets Relief Program (TARP) funds, the Massachusetts Democrat admitted he spoke to a “federal regulator” but according to the Wall Street Journal, “he didn’t remember which federal regulator he spoke with.”

According to explosive new Treasury Department emails uncovered by Judicial Watch, it appears this nameless bureaucrat is none other than then-Treasury Secretary Henry “Hank” Paulson!

These documents, which we obtained in response to a Freedom of Information Act (FOIA) lawsuit, indicate that Frank personally called former Secretary Paulson regarding a TARP cash infusion for the Boston-based OneUnited Bank. And it worked. On November 25, 2008, following Frank’s intervention, the Treasury Department awarded $12,063,000 in bailout funds to OneUnited, which is located in Frank’s district.

Moreover, according to these documents, Frank is not the only Democratic Congressman with dirty hands in the OneUnited bank scandal. Rep. Maxine Waters (D-CA), whose husband, Sidney Williams, served on the OneUnited Board of Directors, also intervened on behalf of the Massachusetts Bank. (Williams resigned shortly after Waters approached federal regulators regarding the OneUnited TARP grant.)

Among the key documents is an October 17, 2008, email from former Deputy Assistant Secretary for Banking and Finance King Mueller to former Assistant Treasury Secretary Neel Kashkari and other Treasury officials referencing the contact between Frank and Paulson:

Just spoke w/ Jim [Segel] in BF’s [Barney Frank’s] office. This is about One United Bank (a minority owned bank in BF’s district). Maxine Waters is interested in the bank as well, Treas[ury] and others met w/ them (minority bankers assoc) last month per the Water’s request. They were a big holder in f/f preferred. BF is interested and may call HMP [Henry Paulson] again about this. FDIC is their primary federal regulator. [Emphasis added.]

And there is also this October 16, 2008, email from Kashkari to former Deputy Assistant Secretary for Appropriations and Management Peter Dugas: “Peter, Jim Siegel [sic] from Frank’s office called a few times-can one of you follow-up with him?” (Segel serves as Frank’s Chief Counsel.) Paulson’s October 2008 calendar, which has been released separately, details calls from Frank on October 2, 3, 7, 9, 13, and 17.

With respect to Rep. Waters, the documents include a January 13, 2009, email from Brookly McLaughlin, Treasury’s Deputy Assistant Secretary for Public Affairs, expressing surprise at Waters’ apparent conflict of interest: “Further to email below, WSJ [Wall Street Journal] tells me: …Apparently this bank is the only one that has gotten money through section 103-6 of the EESA law. And Maxine Waters’ husband is on the board of the bank. ??????”

The fact that Frank and Waters improperly intervened to score some TARP cash for OneUnited does not shock me. This is exactly the kind of corrupt deal-making I expected when the federal government decided to throw massive amounts of taxpayer dollars at private institutions. But I have to say, it is a rare case indeed when the documented evidence of impropriety is so clear.

These documents indicate that Barney Frank has been flagrantly dishonest about his role in lobbying for OneUnited. I mean, who is Frank kidding trying to suggest he didn’t remember calling Hank Paulson? It’s early but this looks to me like it could mushroom into another Keating Five-type scandal. And it certainly calls into question whether Rep. Frank should remain head of the powerful House Financial Services Committee.

No wonder the Obama Treasury Department stonewalled the release of these documents.

As I’ve mentioned previously, without the intervention of Frank and Waters, OneUnited would seem an unlikely recipient of TARP funds. As reported in the January 22, 2009, edition of the Wall Street Journal, the Treasury Department indicated it would only provide funds to healthy banks in order to jump-start lending. Not only was OneUnited Bank in massive financial turmoil, but it was also “under attack from its regulators for allegations of poor lending practices and executive pay abuses, including owning a Porsche for its executives’ use.” The bank continues to flounder and is one of the few financial institutions to have not paid dividends to the federal government in exchange for the TARP cash infusion.

The good news is that the media is beginning to cover this scandal. The Fox Business Channel highlighted our work just last night. To view the segment, go to our YouTube channel here.

Go over and check out the rest of this article from Tom Fitton about Goodwin Liu. Here is just a small sampling.

Let me be clear, Goodwin Liu has the most radical views of any federal judicial nominee in recent memory. As former chairman of the far-left American Constitution Society he is in no small measure a leader of the opposition for those of us who don’t want judicial activists on the bench. I can understand, considering his own background, why Obama would want to appoint an inexperienced liberal to the courts, but the Senate needs to do its job and probe Liu’s views and qualifications. Many think he’s being groomed for a Supreme Court appointment.

By the way, our effort to educate the Judiciary Committee on the Liu nomination recently earned the attention of Fox News Channel. Check it out on Judicial Watch’s YouTube channel here.