AYFKM? Dems Have Been Playing Defense All This Time 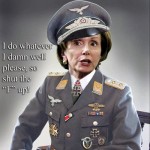 Un-Frakkin-Believable!  Nancy believes that dems need to go on the offensive with their constituents during the break.  What?  Ramming through a number of totally unacceptable policies isn’t being on the offensive?

(As always, emphasis of incredibly stupid comments and some flat out lies is mine.)

Pelosi to Democrats leaving for recess: It’s time to go on offense

Speaker Nancy Pelosi wants House Democrats to go on offense during the critical two-week recess that begins this weekend.

Members returning to their districts should tout the new healthcare law’s benefits to their constituents, according to the “recess packet” issued by Pelosi’s (D-Calif.) office this week and obtained by The Hill.

“With the passage of health insurance reform, this District Work Period is a critical time to go on offense,” the memo states.

Members should “convey the immediate benefits of health reform to your constituents (such as better prescription drug benefits for seniors, tax credits for small businesses and prohibiting insurance companies from canceling your policy if you get sick),” the memo said.

How about those immediate taxes, and those job losses associated with this bill?  How about the 8,000 Sallie Mae employees who are in limbo now that Student Loans are now the government’s business under Nancy’s fascist healthcare bill?  How about all those doctors queuing up for retirement?  How about that $14 Billion (+?) being sucked out of the free market because big companies like Caterpillar, AT&T, and Verizon (among 3500) now have additional taxes to pay – how many are going to lose their jobs now?

Pelosi’s advice to members illustrates that she and other Democratic leaders believe they can capitalize on healthcare to rally before the fall.

The message in the memo wasn’t limited to healthcare.

Lawmakers also should also “demonstrate the work of this Congress to create jobs and strengthen the economy,” and “publicize the benefits of the $800 billion in tax cuts this Congress has enacted” through last year’s $787 billion stimulus package, according to the memo. (“$800 BILLION in tax cuts…through a $787 BILLION stimulus package” – is this a typo from TheHill or more of Nancy’s red crayon math?)


Oh, but I think this is the best one yet.


They should also “tell their constituents how all this was done in a fiscally responsible, open and transparent way,” it states.

Nancy has, almost single-handedly, crippled the entire country with this 2700 page POS law that punishes success, and enslaves companies and individuals to the federal government.

Bad Behavior has blocked 1690 access attempts in the last 7 days.