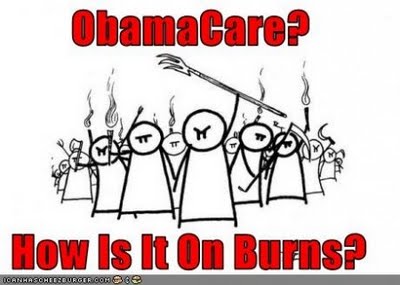 Americans are such a flock of dumb farm animals that the Dems have to take the show on the road to sell us on what this healthcare bill is going to do ‘for us’ even though no one is going to see jacksh** except taxes and IRS agents for years.  If dumb farm animals on the left want to keep believing that this bill is anything but a revenue stream put in place to keep the government afloat for a bit longer, please go right ahead.  Tea Party Patriots will be flipping this Congress in 8 short months and repealing this POS bill ASAP.

A note to Bahana C. Obama: Puleeeezzze keep talking about healthcare right up until the midterms!  Anything you have to continue to sell after it has been passed and signed into law MUST be mana from heaven.

Obama basks in glow of health care victory, but now comes the hard part: selling it to the people

WASHINGTON – President Obama starts a victory lap on health care Tuesday, signing it into law at a White House lawn party – and hitting the road to sell it to the American people.

That may be the tough part. A national CNN poll last night found Americans opposed the bill 59% to 39%. A majority fear it will cost them money while giving government too much power.

Sen. John McCain mocked “champagne toasting” at the White House and pledged a dragged-out fight. “Outside the Beltway, the American people are very angry” with the bill, McCain said. “They don’t like it, and we’re going to repeal this.”

“When people see what the bill actually does, they will see that it helps them in more ways than they might have realized,” said Sen. Chuck Schumer (D-N.Y.)

All the House members who voted for the bill, and “even some that didn’t,” were invited to a signing ceremony this morning on the White House South Lawn, press secretary Robert Gibbs said.

Even as Senate Republicans dug in to block a package of adjustments to the bill and bring down the whole effort, Obama will begin the big sell to families and small businesses in Iowa City, where he first outlined his health care reform vision in 2007.

Gibbs said the Iowa stop will be the first of many to build up health care as a shield against the GOP drive to target Dems who voted “yes” and take back Congress in the fall elections.

“I assume the President will talk about health care for a long time,” Gibbs said.