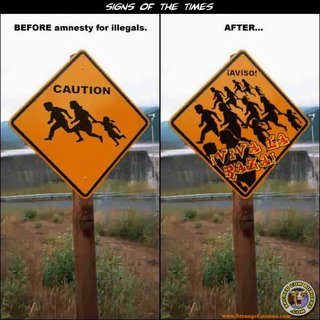 This is EXACTLY what we need when millions of ACTUAL AMERICANS are unemployed!

CAN WE IMPEACH HIM YET?

President Obama on Thursday gave a thumbs-up to the framework of a plan to legalize illegal immigrants and create a flow of low-skilled foreign workers for the future, saying the bill being worked on by a Republican lawmaker and his Democrat counterpart is “promising.”

For which jobs exactly?  Clinton and Bush II made sure that all the jobs went overseas.

The long-awaited framework, written by Sens. Charles E. Schumer, New York Democrat, and Lindsey Graham, South Carolina Republican, calls for illegal immigrants to be put on a path to citizenship and would create a temporary program for future foreign workers. Maybe most contentious of all, it would turn all Social Security cards into tamper-proof IDs to be checked by employers when they are about to hire a new worker. The cards would include biometric information designed to prevent counterfeiting — but the senators said the information would not be stored in a government database. (emphasis mine)

Welcome to the Fascist States Of America.  If you believe that information won’t be stored in a database, you must have just fallen off the turnip truck.

“I congratulate Senators Schumer and Graham for their leadership, and pledge to do everything in my power to forge a bipartisan consensus this year on this important issue so we can continue to move forward on comprehensive immigration reform,” Mr. Obama said in a statement soon after the two senators published their framework on The Washington Post’s Web site.

The senators said their legalization approach would be a “tough but fair” program that would require illegal immigrants to admit they broke the law and make them perform community service and pay a fine.

‘Tough but fair’ would be to throw them out of our country without shooting them first.  THEY BROKE THE LAW WHEN THEY STEPPED ACROSS THE BORDER.