Will Nancy Pelosi Please Report To The Principal’s Office? 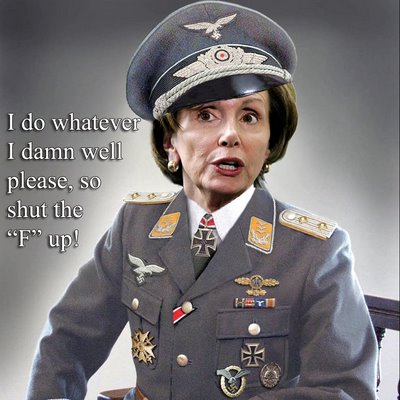 For the LOVE OF GOD, can someone shut this woman up?  I know she is digging an even deeper hole for herself each and every day, but frakkin’ dobermans on skateboards; Nancy STFU!  I am so tired of listening to you; a trait that you and your cohorts do not share.

I have been saying for months that this bill will never be dead, that Congress is IGNORING US, and that we can only be assured that this form of healthcare rape does not pass if we can hold on long enough to fire the entire Congress in upcoming elections.  Where have I been wrong?

Pelosi: GOP has had its day; confident Dems can pull together on health bill

House Speaker Nancy Pelosi (D-Calif.) said Sunday that Republicans have left their mark on the healthcare bill and should accept that the bill will go forward.

“They’ve had plenty of opportunity to make their voices heard,” she said on CNN’s “State of the Union” Sunday morning. “Bipartisanship is a two-way street. A bill can be bipartisan without bipartisan votes. Republicans have left their imprint.”

The public option, for example, has been stripped from the bill because Republicans were so adamantly against it, she said.

“They’ve had a field day going out and misrepresenting what the bill says,” Pelosi said. “But that’s what they do.”

That statement would only apply if millions of Americans hadn’t already read the bill and told those same lawmakers what was in it’s 2700 pages.

On ABC’s “This Week,” just a few days after the bipartisan healthcare summit, Pelosi said, “What’s the point of talking about it any longer?”

BUT IT GETS BETTER!!!  The progressives are salivating and chomping at the bit being this close to passing the biggest expansion of government – evah!  Nancy, Harry, and Bambi are not going to give up; even it means throwing dems right under that very special Obama bus.  Does anyone want to let Nancy know that we plan on firing the majority of them for the BS and attitude they pulled this past year?  Oh that’s right, she isn’t paying attention to us…

House Speaker Nancy Pelosi urged her colleagues to back a major overhaul of U.S. health care even if it threatens their political careers, a call to arms that underscores the issue’s massive role in this election year.

Lawmakers sometimes must enact policies that, even if unpopular at the moment, will help the public, Pelosi said in an interview being broadcast Sunday the ABC News program “This Week.”
“We’re not here just to self-perpetuate our service in Congress,” she said. “We’re here to do the job for the American people.”

It took courage for Congress to pass Social Security and Medicare, which eventually became highly popular, she said, “and many of the same forces that were at work decades ago are at work again against this bill.”

Social Security and Medicare will be the deathknell of this country with their unfunded liabilities.  Nazi Nancy wants to completely tank the country with healthcare.

The White House says Obama, perhaps on Wednesday, will announce a “way forward” on health care. He, Pelosi, and Senate Democratic leaders have left little doubt that they hope to pass a Democratic-crafted bill under “budget reconciliation” rules that would bar Republican filibusters in the Senate. It’s unclear whether Pelosi can muster the needed votes in the House.

White House officials say they will redouble efforts to remind voters that the Senate passed an Obama-backed health care bill in December, with a super majority of 60 votes. The new plan calls for the House to pass that bill and send it to Obama’s desk, and then use Senate budget reconciliation rules to make several changes demanded by House Democrats.

The White House is going to remind us of how much we opposed the ramming of this bill through the Senate on Christmas Eve?  Oh, BRING IT ON!!!

As for the fascist leader of the house, will Nancy report to the principal’s office for a decidedly robust round of discipline considering she still is not listening?

(P.S.  I am well aware of what most of us wish for Nancy, but let’s keep it civil in comments.  I don’t need anymore attention than I already have.)

I had to add this video just in case Nancy does a fly-by: