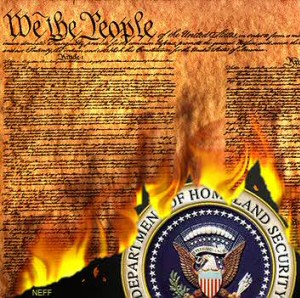 Just another example of how the dems and repubs are two sides of the same coin.

Senate Democrats are pushing for a short-term extension of key provisions in the Patriot Act as part of a package of must-pass measures.

Senate Majority Leader Harry Reid (D-Nev.) is planning to ask for unanimous consent to pass an extension for a host of measures set to expire February 28, according to Senate sources. The request could be made as early as Tuesday night.

The large package of bills includes a year-long extension of three provisions of the anti-terrorism law known a the Patriot Act, as well as extensions for expiring tax provisions, including unemployment insurance, COBRA, flood insurance, the law governing the highway trust fund, the federal flood insurance program and a measure governing satellite television signals.

Is this the only way they can get the republicans to vote for the main parts of this bill?

The first of the three expiring Patriot Act provisions provides the power to seek court orders for roving wiretaps on terrorism suspects who shift their modes of communication. A second allows the government to seek orders from a federal court for “any tangible thing” that is says is related to a terrorism investigation.

The third provision allows the government to apply to a court for surveillance orders involving suspected “lone wolf” terrorists who do not necessarily have ties to a larger organization.

I will continue to say that the Patriot Act IS the biggest threat to our liberty because of the power that has been handed to the executive branch.  This shredding of our Constitution needs to be rescinded immediately.

Bad Behavior has blocked 1750 access attempts in the last 7 days.