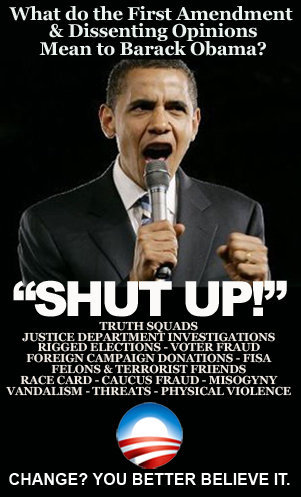 We may actually be getting closer to an impeachable offense since Barack-Baby is getting tired of partisan wrangling and is planning on going off the reservation while using executive orders to make his liberal left, socialist agenda happen.  At least he is predictable…

(As always, emphasis below is mine.)

WASHINGTON — With much of his legislative agenda stalled in Congress, President Obama and his team are preparing an array of actions using his executive power to advance energy, environmental, fiscal and other domestic policy priorities.

Mr. Obama has not given up hope of progress on Capitol Hill, aides said, and has scheduled a session with Republican leaders on health care later this month. But in the aftermath of a special election in Massachusetts that cost Democrats unilateral control of the Senate, the White House is getting ready to act on its own in the face of partisan gridlock heading into the midterm campaign.

What is the point of three branches of government that work as checks and balances if the president can just sign an executive order?  I am so tired of this punk a** b*tch telling me how it is going to be in my country.

“We are reviewing a list of presidential executive orders and directives to get the job done across a front of issues,” said Rahm Emanuel, the White House chief of staff.

Any president has vast authority to influence policy even without legislation, through executive orders, agency rule-making and administrative fiat. And Mr. Obama’s success this week in pressuring the Senate to confirm 27 nominations by threatening to use his recess appointment power demonstrated that executive authority can also be leveraged to force action by Congress.

Mr. Obama has already decided to create a bipartisan budget commission under his own authority after Congress refused to do so. His administration has signaled that it plans to use its discretion to soften enforcement of the ban on openly gay men and lesbians serving in the military, even as Congress considers repealing the law. And the Environmental Protection Agency is moving forward with possible regulations on heat-trapping gases blamed for climate change, while a bill to cap such emissions languishes in the Senate.

In an effort to demonstrate forward momentum, the White House is also drawing more attention to the sorts of actions taken regularly by cabinet departments without much fanfare. The White House heavily promoted an export initiative announced by Commerce Secretary Gary Locke last week and nearly $1 billion in health care technology grants announced on Friday by Kathleen Sebelius, the health and human services secretary, and Hilda L. Solis, the labor secretary.

Would those type of operations over the course of the last 60 years explain the mess we find ourselves in now?

White House officials said the increased focus on executive authority reflected a natural evolution from the first year to the second year of any presidency.

So what he is really saying is that once the honeymoon (dog and pony show) is over, the president just does whatever he pleases?

“The challenges we had to address in 2009 ensured that the center of action would be in Congress,” said Dan Pfeiffer, the White House communications director. “In 2010, executive actions will also play a key role in advancing the agenda.”

SINCE WHEN DAN? Sheeple voted for this empty suit because they were tired of Bush’s heavy hand; change which might actually include following the Constitution and the law.  I know those concepts are foreign to you, but allow me to lay another on you.  Just because you can doesn’t mean you should.  That is probably the only reason why a certain sector of the population has not stepped in already.  That would set one hell of a precedent, wouldn’t it?

When is somebody going to slap some sense into these people and remind them that as much as they may find it distasteful to have the two bodies of Congress make laws, that is whose job it is.  Here let me remind you:

The use of executive authority during times of legislative inertia is hardly new; former Presidents Bill Clinton and George W. Bush turned to such powers at various moments in their presidencies, and Mr. Emanuel was in the thick of carrying out the strategy during his days as a top official in the Clinton White House.

Yeppers, two progressives setting the trend for a freakin’ dictator.

But Mr. Obama has to be careful how he proceeds because he has been critical of both Mr. Clinton’s penchant for expending presidential capital on small-bore initiatives, like school uniforms, and Mr. Bush’s expansive assertions of executive authority, like the secret program of wiretapping without warrants.

Already, Mr. Obama has had to reconcile his campaign-trail criticism of Mr. Bush for excessive use of so-called signing statements to bypass parts of legislation with his own use of such tactics. After a bipartisan furor in Congress last year, Mr. Obama stopped issuing such signing statements, but aides said last month that he still reserves the right to ignore sections of bills he considers unconstitutional if objections have been lodged previously by the executive branch.

A president ignoring sections of bills?  Just don’t sign the damn thing!  SEND IT BACK if you don’t like it.  Do you have the American peoples’ back or not? Don’t answer that, we already know…


Go over and read the rest if you can stand it.  As for Obama’s current maneuvering to push his anti-American agenda, no shock or awe there.   I know the left is loving their dictator-wanna-be now because he might actually push some progressive crap through.  The only thing that I am actually surprised about is that he kept up the charade for over a year before he decided to go sideways on the country.