In the vein of “things that make you go hmmmm?”, Reuters ran a story yesterday which has been subsequently pulled.

I found the original on Daily Paul, tracked the second part of the story on Goldtalk Forum, and then found the entire story on Yahoo – CANADA. I find it very interesting that the story was pulled from the American news services, yet left on Canada’s.  All one has to do is read the story and realize that Obama is about to break yet another campaign promise.

How stupid do they think we are?

Here is the original story pieced together, and screenshots of the re-tracted article.  Finally, you will see a screenshot of the entire article on Yahoo! Canada. (There is a zoom feature on the photos, click to enlarge, and click and drag to move the images.)

NEW YORK (Reuters.com) –The Obama administration’s plan to cut more than $1 trillion from the deficit over the next decade relies heavily on so-called backdoor tax increases that will result in a bigger tax bill for middle-class families.

In the 2010 budget tabled by President Barack Obama on Monday, the White House wants to let billions of dollars in tax breaks expire by the end of the year — effectively a tax hike by stealth.

While the administration is focusing its proposal on eliminating tax breaks for individuals who earn $250,000 a year or more, middle-class families will face a slew of these backdoor increases.

The targeted tax provisions were enacted under the Bush administration’s Economic Growth and Tax Relief Reconciliation Act of 2001. Among other things, the law lowered individual tax rates, slashed taxes on capital gains and dividends, and steadily scaled back the estate tax to zero in 2010.

Investors will pay more on their earnings next year as well, with the tax on dividends jumping to 39.6 percent from 15 percent and the capital-gains tax increasing to 20 percent from 15 percent. The estate tax is eliminated this year, but it will return in 2011 — though there has been talk about reinstating the death tax sooner.

Millions of middle-class households already may be facing higher taxes in 2010 because Congress has failed to extend tax breaks that expired on January 1, most notably a “patch” that limited the impact of the alternative minimum tax. The AMT, initially designed to prevent the very rich from avoiding income taxes, was never indexed for inflation. Now the tax is affecting millions of middle-income households, but lawmakers have been reluctant to repeal it because it has become a key source of revenue.

Without annual legislation to renew the patch this year, the AMT could affect an estimated 25 million taxpayers with incomes as low as $33,750 (or $45,000 for joint filers). Even if the patch is extended to last year’s levels, the tax will hit American families that can hardly be considered wealthy — the AMT exemption for 2009 was $46,700 for singles and $70,950 for married couples filing jointly.

Middle-class families also will find fewer tax breaks available to them in 2010 if other popular tax provisions are allowed to expire. Among them:

* Taxpayers who itemize will lose the option to deduct state sales-tax payments instead of state and local income taxes;

* The tax deduction for up to $4,000 of college tuition and expenses;

* Individuals who don’t itemize will no longer be able to increase their standard deduction by up to $1,000 for property taxes paid; 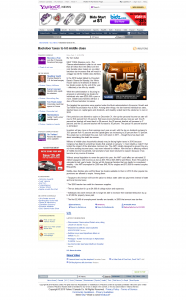 How’s that Hope and Change working out for ya?

The Feb 1 story headlined “Backdoor taxes to hit middle class” is wrong and has been withdrawn. The story said lower-income families will pay more under tax provisions scheduled to expire Dec 31. The Obama administration’s budget calls for the extension of those tax provisions for households earning less than $250,000. There will be no substitute story.

UPDATE #2:
It’s 8pm est. and the story has hit the Washington Post. I checked the Yahoo! Canada page and it has been pulled also.

By Rachel Weiner
The White House succeeded Monday night in getting Reuters to pull an unfavorable, inaccurate story about tax policy that had been featured on the Drudge Report.

The story claimed that the Obama administration planned to reduce the deficit by allowing middle class tax cuts to expire. Hours later the story was taken offline, replaced with a notice explaining that the facts were wrong. The note initially said that a replacement version would come out later this week; it was later revised to say that “there will be no substitute story.” Wrote Reuters:

The Feb 1 story headlined “Backdoor taxes to hit middle class” is wrong and has been withdrawn. The story said lower-income families will pay more under tax provisions scheduled to expire Dec 31. The Obama administration’s budget calls for the extension of those tax provisions for households earning less than $250,000. There will be no substitute story.

The story was taken down Monday night, but still led the conservative Drudge Report at 11:30 a.m. Tuesday. Later, the website added that it had been pulled.

A White House official told Talking Points Memo that they reached out to Reuters to point out factual errors in the piece.

“The story went out, and it shouldn’t have gone out,” said Courtney Dolan, a spokeswoman for Reuters. “It had significant errors of fact.”

An official told TPM that Reuters’ White House team “worked to quickly remedy the situation and helped get the story completely withdrawn.”