Reassuring To Know The White House Is So Predictable 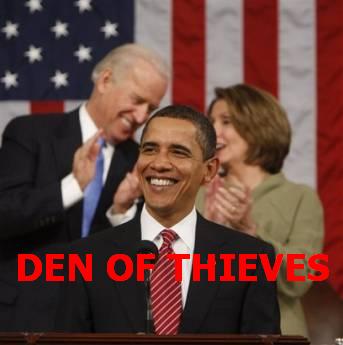 Team O is the definition of predictable.  For those of us that have been sounding the alarm about Obama’s socialism since well before Joe the Plumber received the ‘spread the wealth’ comment, the knowledge of exactly how Team O is going to continue it’s fascist march for total control of your life social justice is a relief.  Obama’s crew are Alinsky acolytes who will follow the ideology to the very end with very little departure from the “Rules For Radicals”.  This particular administration is not going to change course or listen to the ‘dirty masses’ because they ‘won’ and they just know better than the rest of us what is best for us.  When in doubt – lie, cheat, steal, change the rules, and spin, spin, spin…

Senior White House adviser David Axelrod on Sunday said that the Obama administration remains committed to its agenda after a week of setbacks.

Axelrod vowed that the president would not back down on passing a healthcare reform legislation and would use the State of the Union address on Wednsday to lay out “additional steps” to energize the sputtering economy.

“He’s going to go at it, he’s going to stick to it, because there is too much at stake,” Axelrod said on CNN’s “State of the Union.”

When one has a group of revolutionaries who have finally captured the White House en masse, even thinking about backing away from their chance to control Americans and their descendants would be a cardinal sin, and just too big a temptation to pass up.  These folks only have a few more months to achieve the flip so they are ‘all in’.

“You’ll hear in the State of the Union some of his ideas about additional steps that we can take to create and stir hiring around the country,” he added.

This is just more of the same rhetoric that Obama has been spouting for months.  If the White House was concerned about creating jobs, they would not have been pushing health care for ten months.  I understand that health care is chewing up budgets, but in our current situation, focusing on health care is like putting a bandaid on a scratch when the patient is in full cardiac arrest.

A number of events occurred last week that critics used in saying that President Barack Obama should take a step back and readjust his priorities in 2010.

The new political environment in the Senate has caused Democratic leaders to readjust their strategy to pass their bill, though Republican critics have called on them to halt their effort. But Axelrod reiterated that Obama will continue the negotiations.

“The president will not walk away from the American people,” Axelrod said on ABC’s “This Week.” “[He] will not hand them over to the tender mercies of the health insurance companies.”

Don’t lie to us David.  Obama never walked WITH the American people. Obama made deals with the insurance companies, big pharma, and the unions; not exactly your average American.  Health care reform was never about bringing the insurance companies into line.  If one wanted to achieve that, laws would have been passed immediately to allow insurance companies to compete across state lines, and force them to stop using pre-existing conditions as a reason for denial.

Obama’s renomination of Federal Reserve chairman Ben Bernanke also ran into trouble this week as bloc of senators channeled voter outrage over the struggling economy in opposing his second term.

Over a dozen senators from both parties have questioned Bernanke’s role in the baking bailouts during the financial crisis of 2008.

“Understand that chairman Bernanke offered very strong and steady leadership during this crisis without which we may have slipped into the abyss,” he said on “State of the Union.”  “The president is very confident that the chairman will be confirmed.”

Axelrod acknowledged voter anger over the economy and stressed that the Obama administration could solve its problems. He said that former President George W. Bush handed Obama a faltering economy and large debts and that Obama’s popularity has suffered as a result.

“You can’t govern in an economy like this without great disaffection,” he said.

George Bush handed Obama a faltering economy?  AYFKM?  Obama RAN to become president to fix the economy, and no amount of blaming Bush is going to make the video tape of the campaign trail go away.  Barry KNEW exactly what he was getting into and welcomed it.  If he wants to play dumb, well then maybe he isn’t qualified to be president?  Oh ****, we already knew that.

“I cannot imagine anything more important to talk about than the economic crisis and the notion that we would want to brush that aside and engage in the usual political shenanigans and smear tactics that have come to characterize too many political campaigns is not what the American people are looking for.”

So back to the question; if the economy was so frakkin’ important in October 2008, why has this administration been pushing health care for the past year?  Answer: to make the crisis worse, Americans more desperate, and create a climate for the government to come to the rescue.  Only problem is that this group of folks really think that someone other the American People and Their Wallets are the government.  Unemployment is around 23% which means tax revenues are continuing to fall and yet, this government wants to raise the debt ceiling by another $2 Trillion.  Do the math kids, everything with Team O is planned, organized, and intentional.  NOBODY is this stupid.

As for David? Axelrod is a hack; pay attention to Organizing for America and David Plouffe.