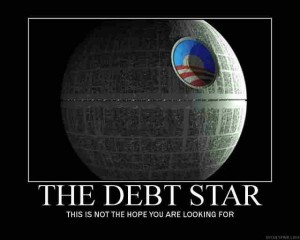 How is it that the Obama administration can go after executive bonuses from Wall Street banks yet continue to give millions of dollars of our hard earned money to the executives of the two giants now currently on taxpayer funded life support? Hmmm?

“The economic miracle that has been the United States was not produced by socialized enterprises…It was produced by private enterprises in a profit-and-loss system.” –Milton Friedman

On Christmas Eve, the Department of Treasury said that it would remove the $400 billion cap on Treasury’s funding of Fannie Mae and Freddie Mac, the two bankrupt government sponsored enterprises that Secretary Tim Geithner said were at the “epicenter” of the financial crisis. The move gives the failed GSEs unlimited taxpayer funded bailouts to cover losses incurred as a result of their managements’ recklessness and their boards of directors’ oversight failures. Geithner’s Treasury essentially turned the two failed GSEs into full government agencies and further exposes taxpayers to losses that the GSEs may incur in the future. The two GSEs are expected to report losses in the billions for 2009. Also on Christmas Eve, Fannie and Freddie disclosed that they received approval to pay $42 million in compensation packages to 12 top executives (all federal government employees and payable in cash) for 2009. Interestingly, the Democrats, led by Geithner and Rep. Barney Frank (D-MA), have launched an all out attack on capitalism by attempting to restrict the compensation of Wall Street firms they deem to be too profitable.

Fannie Mae and Freddie Mac are government created duopolies charged with providing liquidity to the mortgage market by purchasing mortgages from lenders and either holding those mortgages in their portfolios or packaging the loans into mortgage-backed securities that are sold to investors. Fannie and Freddie were privately held companies that generated big profits for their managements, boards of directors, and shareholders by being beneficiaries of advantages not shared by their competitors, including an implicit federal guarantee (i.e., a taxpayer bailout if the companies failed). Their managements and boards of directors, including former Freddie board member and current White House chief of staff Rahm Emanuel, are textbook examples of recklessness having put Fannie and Freddie in a position to cost taxpayers by chasing compensation targets and carrying out Democrat housing policies without concern for market risks. The taxpayers were left with two failed companies and potential liability of up to $400 billion as a result of the GSEs being put into conservatorship, but due to Geithner’s Christmas Eve spectacular, the taxpayers are now liable for all of Fannie’s and Freddie’s losses.

Arbitrarily Rewards Failure: Many would argue that failed firms that receive a taxpayer funded bailout and have not repaid the taxpayers should have their pay packages reviewed and, if necessary, limited until the firm makes a profit and the taxpayers are made whole. For example, the CEOs of failed firms, Citigroup, AIG, GM and Chrysler, should not and will not receive lavish compensation packages. However, the Democrats implemented an unlimited taxpayer funded bailout plan to indefinitely prop up Fannie and Freddie, and the CEOs of the government owned companies will receive millions of dollars in compensation even though the bankrupt companies are expected to report a loss for 2009. Geithner and acting-director of the Federal Housing Finance Agency, Edward DeMarco, should provide taxpayers the rationale for such decisions at Congressional oversight hearings immediately.

Wall Street-Style Compensation: As wards of the state with essentially no stock price, Fannie and Freddie have become government agencies. In fact, Rep. Barney Frank, one of main proponents of the policies that destroyed the housing market recently stated, “They’re not what they used to be-that inappropriately hybrid, private stock company, public policy instrument…They have become the public utility that finances housing in America to a great extent.” As government agencies, Fannie’s and Freddie’s employees are government employees. The president of the United States makes $400,000, but the CEOs of Fannie and Freddie are eligible to receive $6,000,000 each.

Creates Conditions for Another Financial Meltdown: The current financial turmoil was largely caused by the two GSEs. Peter Wallison, writing in the Wall Street Journal stated, “By the end of 2008, Fannie and Freddie held or guaranteed approximately 10 million subprime and Alt-A mortgages and mortgage-backed securities-risky loans with a total principal balance of $1.6 trillion. These are now defaulting at unprecedented rates, accounting for both their 2008 insolvency and their growing losses today. Since 2008, under government control, the two agencies have continued to buy dicey mortgages in order to stabilize housing prices.”

The pubs are correct. From the LATimes, and under the cover of the Xmas Eve health care vote.  Now why would we, as the people footing the bill, be giving bonuses to the men at the helm of failing government enterprises that control $5 Trillion in residential mortgage debt?  And one last note, remember Barney wants to abolish both these giants and start over with some sort of housing system.  Do you trust Barney Frank to come up with a capitalist, free-market based enterprise that isn’t going to collapse the system a few decades from now?

Reporting from Washington — The chief executives of Fannie Mae and Freddie Mac each could earn as much as $6 million this year and next, despite huge continued losses at the seized mortgage giants and a government bailout tab of more than $100 billion that the Obama administration said could rise even higher.

Fannie Mae Chief Executive Michael Williams will earn a base salary of $900,000 in 2009 and 2010, with a deferred base salary of $3.1 million each year to be paid “only if the enterprise meets performance metrics” set by its board and subject to government review, according to filings Thursday with the Securities and Exchange Commission. An additional $2 million is possible annually, identified as “target incentive opportunity.” Freddie Mac Chief Executive Charles E. Haldeman Jr. will get the same compensation package.

Four additional Fannie Mae executives will earn base salaries above $500,000 and have compensation packages for 2009 and 2010 that could pay each of them at least $2.7 million annually. One other Freddie Mac executive will receive a base salary over $500,000 and could earn as much as $1.15 million a year.

Also on Thursday, the administration said it was prepared to increase the maximum amount it would pay to bail out the troubled institutions

The announcements are likely to provoke outrage in Congress, particularly among Republicans, who have charged that Fannie Mae and Freddie Mac caused the housing boom and financial crisis with lax mortgage standards. Senators headed home for the holidays Thursday, and House members were already out of town, limiting the initial reaction.

“The Obama administration’s decision to write a blank check with taxpayer dollars for the continued bailout of Fannie Mae and Freddie Mac is appalling,” Rep. Scott Garrett (R-N.J.) said. “Not only is this a continued bailout of failed entities that need to be privatized to protect the taxpayer, the timing of the announcement is clearly designed to try and sneak the bailout by the taxpayers.”

The Treasury Department has pumped $60 billion into Fannie Mae and $51 billion into Freddie Mac in exchange for stock since federal officials seized them in September 2008 in one of the largest and most complex federal bailouts. Each company has a lifeline of as much as $200 billion, which administration officials said Thursday they would “increase as necessary” over the next three years as the companies continue to struggle.

The smell of corruption continues to get stronger.

Can We Impeach Him Yet?

Bad Behavior has blocked 2739 access attempts in the last 7 days.