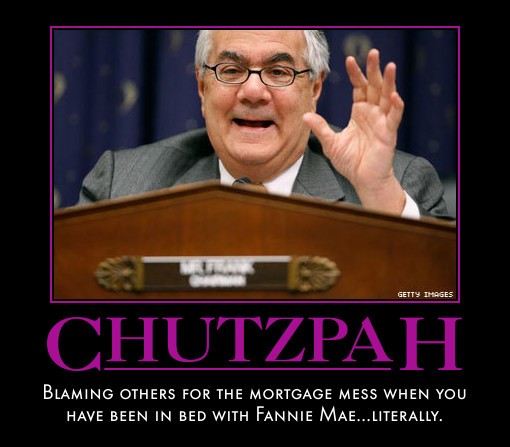 I have been watching the market fall over 400 points this week because of steps that Obama and the socialist dems are taking in the District of Criminals with the bank limits.  Now Barney Frank is pushing to abolish Fannie and Freddie and replace it with something else; not quite sure what that’s going to be though.  That’s true leadership; once again talking about hope and change without a freakin’ plan.

I am assuming that the leftists are going to move toward that public utility idea that was floated earlier in the month.

Is anybody else besides me thinking that the guy that was involved in growing Fannie and Freddie to a point where they are threatening the nation’s stability should not be involved in creating something else to replace his mess?

“The companies now own or guarantee more than $5 trillion in U.S. residential debt, and were responsible for as much as 75 percent of the new mortgages made last year.”

Let that sink in for a minute….and Barney, and the Progressive Socialist Democratic congress are about to ‘do something’ about $5 TRILLION in U.S. Residential Debt. Breathe! Breathe!

Jan. 22 (Bloomberg) — Representative Barney Frank, whose committee oversees Fannie Mae and Freddie Mac, said he will push to do away with the companies in favor of a different model for U.S. mortgage financing.

“The committee will be recommending abolishing Fannie Mae and Freddie Mac in their current form and coming up with a whole new system of housing finance,” Frank, a Massachusetts Democrat and chairman of the House Financial Services Committee, said at a hearing in Washington today. “That’s the approach, rather than a piecemeal one.”

The companies, the largest sources of money for U.S. home loans, were seized by regulators almost 17 months ago because of their risk of failing and have since survived on $110.6 billion in taxpayer-funded aid. Frank said Congress also needs to figure out what to do with the remaining shareholders in Fannie Mae and Freddie Mac as well as investors in the companies’ $5.4 trillion in mortgage bonds and $1.7 trillion in unsecured corporate debt.

“That will be one of the things we will be talking about,” Frank told reporters after the hearing. “The stockholders were of course already pretty much beaten up.”

Washington-based Fannie Mae, which dates back to the 1930s, and McLean, Virginia-based Freddie Mac, started in 1970, were chartered by the government primarily to lower the cost of homeownership. They buy mortgages from lenders, freeing up cash at banks to make more loans. They make money by financing mortgage-asset purchases with low-cost debt and on guarantees of home-loan securities they create out of loans from lenders.

The companies now own or guarantee more than $5 trillion in U.S. residential debt, and were responsible for as much as 75 percent of the new mortgages made last year.

Congress hasn’t made any decisions on how to restructure the U.S. home-loan market and will hold hearings before proposing any change, Frank said.

“We’re going to look at the whole question of housing finance,” Frank said. “Sorting out the function of promoting liquidity in the market, and also the secondary market in general but then also doing some kind of subsidy for affordability.”

“I don’t know anybody who thinks Fannie and Freddie should continue,” he said.

Mortgage investors “shrugged off the news” today, said Nicholas Strand, a mortgage-bond analyst at Barclays Capital in New York. As Congress begins debating the issue in earnest this year, he said “you might see some concern by mortgage investors reflected in the pricing, but you’re not seeing that today.”

Fannie Mae and Freddie Mac have been run for more than 40 years as shareholder-owned companies that also have a federally chartered mission to promote the housing market. Those dual mandates have collided and contributed to the companies’ failure, Federal Deposit Insurance Corp. Chairman Sheila Bair said in a December interview.


How would the markets react?

Bad Behavior has blocked 2790 access attempts in the last 7 days.