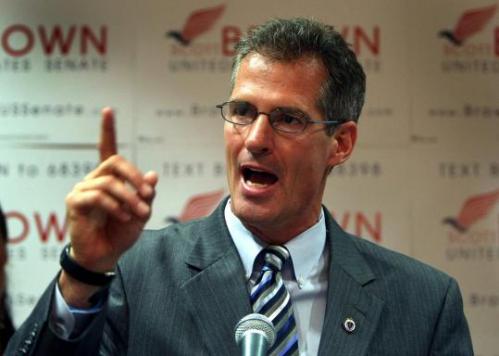 Toss Up In Massachusetts

The Massachusetts Senate race is now a toss up.

Buoyed by a huge advantage with independents and relative disinterest from Democratic voters in the state, Republican Scott Brown leads Martha Coakley 48-47.

Here are the major factors leading to this surprising state of affairs:

-As was the case in the Gubernatorial elections in New Jersey and Virginia last year, it looks like the electorate in Massachusetts will be considerably more conservative than the one that showed up in 2008. Obama took the state by 26 points then, but those planning to vote next week only report having voted for him by 16.

-Republicans are considerably more enthusiastic about turning out to vote than Democrats are. 66% of GOP voters say they are ‘very excited’ about casting their votes, while only 48% of Democrats express that sentiment- and that’s among the Democrats who are planning to vote in contrast to the many who are apparently not planning to do so at this point.

-Brown has eye popping numbers with independents, sporting a 70/16 favorability rating with them and holding a 63-31 lead in the horse race with Coakley. Health care may be hurting Democratic fortunes with that group, as only 27% of independents express support for Obama’s plan with 59% opposed.

-In a trend that’s going to cause Democrats trouble all year, voters disgusted with both parties are planning to vote for the one out of power. Perhaps the most remarkable thing about Brown’s standing is that only 21% of Massachusetts voters have a favorable opinion of Congressional Republicans…but at the same time only 33% view Congressional Democrats favorably. And among voters who have a negative take on both parties, who account for more than 20% of the electorate, Brown leads 74-21.

-Because he’s basically been untouched so far, Brown’s favorability spread is a remarkable +32, at 57/25. For some perspective on how good those numbers are, Bob McDonnell was at a +20 spread with Virginia voters in our final poll there before going on to a 17 point victory.