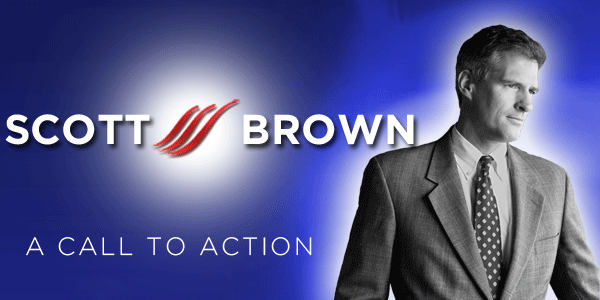 “I will vote against the health care bill because it is bad for Massachusetts and bad for the country If you believe the health care bill has been mishandled and that it will lead to more government, higher taxes and increased spending, then vote for me and I will stop it from becoming law.”- Scott Brown, December 23, 2009.

Massachusetts can send the District of Criminals a message that is louder and clearer than anything that has come before by electing a republican to Dead Kennedy’s seat.

You may be a Scott Brown voter if:

#21:  From an email from the Brown Campaign.  If you are an activist that wishes to go into Massachusetts to help Scott stop Obamacare, his campaign will provide food and lodging for you.

Scott Brown will be the 41st Republican to stop Obamacare if he wins on Jan 19.

We are less than two weeks away from making history. We’re the only state in this nation about to elect a U.S. Senator. The choice we make will send a powerful message to the big-spenders in Washington, and just in time. They need to quit expanding the Federal government, and start expanding this economy and defending our jobs.

Scott Brown needs your help. Will you help us make history?

We have put together a massive Get Out The Vote (GOTV) operation and we are looking for volunteers to help us make phone calls and knock on doors in the final 5 days of the campaign.

If you are available to volunteer from Friday, January 15th through January 19th please click here to fill out the online application.  Once the campaign has reviewed your application, someone will contact you with further information.

Please note that the final days of the campaign are the most important and you will be expected to volunteer from 9am-9pm. Only those who are willing and dedicated should apply.

The campaign will provide volunteers who are willing to help with our GOTV efforts, food and lodging for Jan 15th through the 20th (2 volunteers per room).

If you cannot make it but would still like to help, you can make calls from your HOME. Thanks so much for your interest in helping us achieve victory on January 19th.

-You can make phone calls from home.  Sign-up, and they will send you a password.  It’s easy.


Sean Hannity will be interviewing Scott Brown on ‘Hannity’ today at 9pm eastern.

UPDATE: From The NY Times

Democrats Anxious Over a Once-Safe Seat

BOSTON — Martha M. Coakley, the Democrat running for Senator Edward M. Kennedy’s seat in Massachusetts, had seemed so certain of winning the special election on Jan. 19 that she barely campaigned last month.

But the dynamic has changed in recent days. The news that two senior Democratic senators will retire this year in the face of bleak re-election prospects has created anxiety and, even in this bluest of states, a sense that the balance of power has shifted dramatically from just a year ago.

With the holidays over and public attention refocused on the race, Ms. Coakley’s insistence on debating her Republican opponent, Scott P. Brown, only with a third-party candidate present has drawn mounting criticism.

And a new poll that showed a competitive race between Ms. Coakley and Mr. Brown has generated buzz on conservative blogs and energized the Brown campaign — though many news organizations dispute its methodology.

In a sudden flurry of activity, the Coakley campaign released its first television advertisement on Thursday and accepted the endorsement of Mr. Kennedy’s widow, Victoria Reggie Kennedy, at a splashy event outside Boston.

A Brown win remains improbable, given that Democrats outnumber Republicans by 3 to 1 in the state and that Ms. Coakley, the state’s attorney general, has far more name recognition, money and organizational support.

But a tighter-than-expected margin in the closely watched race would still prompt soul-searching among Democrats nationally, since the outcome will be the first real barometer of whether problems facing the party will play out in tangible ways at the polls later this year.

“If I had to bet a week’s salary,” said Dennis Hale, a political science professor at Boston College, “I’d still bet it on Coakley. But this is going to be like in the military, where the bullet misses you but it still scares you to death.”

Here is the factor that could affect the whole nation; independent voters.

Republicans are hoping that diminished support for President Obama and his party among independents could give Mr. Brown a shot at winning. About half of the state’s voters are not affiliated with a party.

Nope, America’s isn’t fed up, and we are all just paid astroturfers.

Just keep insulting us by running these progressive lunatics and find out what happens.


(Author’s Note: I have no regrets – I didn’t vote for The Chosen One.)