Hold On To Your Money! 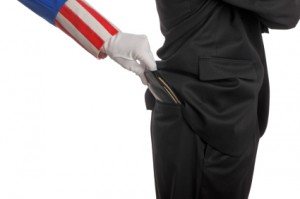 February is just around the corner, and the banks are ramping up to the enactment of the Credit Card Act of 2009.  I am absolutely convinced that our congress is full of inferior minds that have no iota of a clue what capitalism is.  If they did, all of the unforeseen consequences that occur to us, the taxpayers, would not longer be occurring.  I suppose we could all cut up our cards, close our banks accounts, and go completely off the grid.  That might get their attention.

The nation’s banks will be bombarding customers with new fees and products in 2010 as they try to replace more than $50 billion in revenue wiped out by new rules that clamp down on certain business practices.

So far, the changes are mostly concentrated in checking accounts and credit cards. In addition to attaching new fees to old products, banks are introducing new types of accounts that they hope will reel in new customers and reduce their funding costs.

For plastic, the new rules go into effect in February as part of the Credit Card Act of 2009. The rules will limit some interest-rate increases, require more disclosure to customers and prohibit banks from raising interest rates on current balances unless a customer is at least 60 days behind in a payment.

These new fees don’t apply just to the big banks and credit card companies.  Other banks are looking for “areas of opportunity” to take more money out of your wallet.

BBVA Compass, a regional bank with 748 branches, is promoting a checking account that it introduced three years ago as a way to generate revenue and attract new customers. Called “Build to Order,” customers customize their accounts from a menu of options such as receiving interest on checking, no minimum-balance requirements or free usage of another bank’s automated teller machines. The first two selections are free; customers then pay $2 a month for each additional feature they choose.

“There may be some areas of opportunity that banks really haven’t focused on because they had the engine of overdraft fees,” said Chris Gill, who specializes in the community-banking industry at SNL Financial in Charlottesville, Va.

The bank is conducting research to determine if customers would be willing to pay more for heftier rewards programs, and real-time alerts for fraud or low balances, said Rick Claypool, director of BBVA Compass’s consumer deposit products.

Other banks are expected to eliminate free checking completely, raise fees on safe-deposit boxes and charge customers more for issuing a stop-payment on a check.