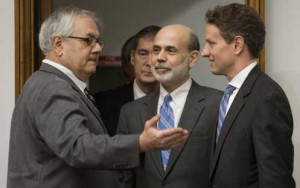 When legislation coming from an entrenched Washington democrat is close to 1,300 pages, there are bound to be goodies inside.  Barney Frank is giving away trillions to the Wall Street Banks, and making sure that bailouts are definitely a event in the future should the poor bankers befall hard times again.

From Bloomberg and David Reilly:

Dec. 30 (Bloomberg) — To close out 2009, I decided to do something I bet no member of Congress has done — actually read from cover to cover one of the pieces of sweeping legislation bouncing around Capitol Hill.

Hunkering down by the fire, I snuggled up with H.R. 4173, the financial-reform legislation passed earlier this month by the House of Representatives. The Senate has yet to pass its own reform plan. The baby of Financial Services Committee Chairman Barney Frank, the House bill is meant to address everything from too-big-to-fail banks to asleep-at-the-switch credit-ratings companies to the protection of consumers from greedy lenders.

I quickly discovered why members of Congress rarely read legislation like this. At 1,279 pages, the “Wall Street Reform and Consumer Protection Act” is a real slog. And yes, I plowed through all those pages. (Memo to Chairman Frank: “ystem” at line 14, page 258 is missing the first “s”.)

The reading was especially painful since this reform sausage is stuffed with more gristle than meat. At least, that is, if you are a taxpayer hoping the bailout train is coming to a halt.

If you’re a banker, the bill is tastier. While banks opposed the legislation, they should cheer for its passage by the full Congress in the New Year: There are huge giveaways insuring the government will again rescue banks and Wall Street if the need arises.