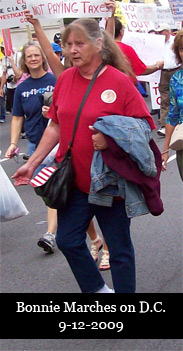 Anita of OneNerveLeft informed me today that another Tea Party Patriot has been called home, Bonnie Kuzminski of the Northwest Indiana Patriots.

Unbeknownst to me, and in keeping with Bonnie’s perchant for working in the background, she was an avid reader of LM, was in DC for the 9.12.09 march, and was the driving force behind the Northwest Indiana Patriots.  It is truly my loss that I did not get the chance to know this amazing woman.

Please take a moment to visit NWIP’s website (linked above), read the memoriam to another great American Patriot who has been taken from us too soon, and honor the memory of a mom, wife, and average American that believed as we do that we can make a difference in our nation’s future.  Do not allow yourselves to forget the sacrifices that are being made each day by every one of us, because on that path lies the slumber we all have woken up from.

Bonnie was the motor driving the NWIPs. She authored every post on this blog, and wrote or co-wrote every email blast and newsletter ever sent out by the NWIPs. She helped organize, set up and run our events. She opened her home for an NWIP yard sale. Bonnie did all this – while receiving zero compensation – because she believed in the principles of limited government and fiscal and individual responsibility. She did all she could to help preserve liberty for her fellow citizens.

Bonnie recently related the story of how she came to be associated with the NWIPs. Like many of us, she was frustrated with the political direction of our nation. Also like many of us, she felt alone in her frustration, seeing no outlet or opportunity to have an effect. Then the Tea Party movement began, and news came of a Tax Day Tea Party in Valparaiso. Bonnie and Gary went, excited at the possibilities, but unsure of what would come of it. Would anyone show up? Would it just be 5 people gathered to say goodbye to our founding principles?