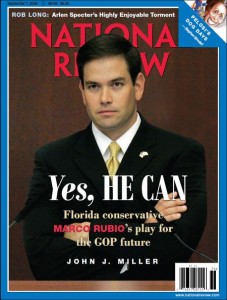 Everytime I see stories like the one that follows, I think of Nancy Pelosi and Jan Schakowski labeling Tea Party Patriots as racist, nazi, gun nuts, and despicable people.  Then I think about Lt. Col. Allen West running for Florida-22 and Marco Rubio running for the U.S. Senate.

The Tea Party Patriots may not have enough time to set up a complete third party organization, but they will be making the decisions about who is running in future races from dog catcher to president. (See NY-23, NJ Governor’s Race, VA Governor’s Race).

Rubio Pulls Even With Crist In Senate Race

A new poll has found that Florida Governor Charlie Crist’s campaign for the U.S. Senate is currently in deep trouble. The new Rasmussen poll of likely GOP voters found Crist and his Republican opponent, Marco Rubio, are tied with 43 percent of the vote. This is a huge swing from just a few months ago when most experts believed Crist would win in a landslide.

While Crist’s numbers have been in an almost free fall, Rubio’s name recognition amongst Republicans has rapidly grown. The new poll found 34 percent of GOP voters now view Rubio “very favorably.” In the same poll in August, Rubio’s “very favorable” ratings were at 18 percent.

On the flip side, Crist’s numbers have fallen off a cliff. Only 19 percent of likely GOP voters have a “very favorable” opinion of the governor. According to Rasmussen, that’s a double-digit decline since August.

Crist’s precipitous drops in favorability ratings are tied to Rubio’s ability to link Crist and President Barack Obama, who is loathed by many GOP voters. Rubio has repeatedly hammered Crist’s decision to support the president’s $787 billion stimulus bill. The irony though is Rubio has admitted he would have accepted the stimulus money as well, but Rubio adds that Crist’s problem was he supported it from the beginning which Rubio said he wouldn’t have done.

The Florida GOP race is being followed closely by national political watchers to see what, if any, impact the tea party movement might have amongst GOP voters. In other political races, the “tea party” has threatened to run its own candidate if the GOP candidate isn’t far enough to the right. The problem for the GOP is that if a tea party candidate can shave off enough support from the Republican candidate, both parties will lose.

For example, the Rasmussen poll found that on a generic ballot, the Republicans have a seven point lead over Democrats in the 2010 Senate race. But, if a “tea party” candidate jumps into the race, everything changes. Rasmussen found in a three-way race, Democrats would pull in 36 percent of the vote, the tea party candidate will bring in 23 percent and Republicans would finish last at 18 percent.

Marco Rubio is National Review’s cover boy: ‘Yes, HE CAN’

Marco Rubio is on the cover the new National Review – a coup that should help the Miami Republican raise some national money from grass roots conservatives. The writer is John J. Miller, who has written several pieces critical of Charlie Crist:

On paper, it looks like a mismatch between an unbeatable juggernaut and a doomed also-ran.

Yet Crist may be vulnerable: He warmly embraced President Obama’s stimulus spending and is one of the most liberal politicians in the Republican firmament. Rubio is among the brightest young stars on the right. Their contest could become the sleeper race of 2010.

Marco Rubio (born May 28, 1971, Miami, Florida) was the Speaker of the Florida House of Representatives during the 2007 and 2008 Legislative sessions. He was first elected to the Florida House as a Republican on January 25, 2000, from the 111th district. He is a candidate for the U.S. Senate seat currently held by George LeMieux.

Rubio is a Roman Catholic of Cuban descent, and he is fluent in Spanish. His parents were immigrants from Cuba. His father was a bartender and his mother was a maid. Rubio was born in Miami and lived in Las Vegas, Nevada from 1979 to 1985. His family returned to Miami in the summer of 1985. Rubio attended South Miami Senior High School and graduated in 1989. He then attended Tarkio College for one year on a football scholarship from 1989 to 1990 before enrolling at Santa Fe Community College and the University of Florida. He received his B.S. from the University of Florida in 1993 and his J.D. Cum Laude from the University of Miami in 1996. While studying law, he interned for Congresswoman Ileana Ros-Lehtinen.

Marco Rubio served as a City Commissioner for West Miami before being elected to the House of Representatives for the 111th District in a special election on Jan. 25, 2000 and won repeated re-election.[1] In November 2006, he was elected Speaker of the Florida State House for the 2006-2008 term.

He is best known for his book 100 Innovative Ideas for Florida’s Future. The book was compiled from Rubio’s travels around the state to gather ideas from citizens. This was done through what Rubio calls “Idearaisers”. Many of the issues that he pushed for in his first year as speaker came from ideas in this book.

During 2007, Marco Rubio championed a major overhaul of the Florida tax system. He wanted to reduce property taxes and decrease the size of government. While his effort stalled, it created enough debate within the Florida Legislature to pass a more modest plan supported by Crist.

Monster readers; please add links and information about Marco Rubio and Charlie Crist to this post to help educate Floridians and the rest of America about these candidates.

Bad Behavior has blocked 2830 access attempts in the last 7 days.