ACORN: A Seat At The Financial Regulatory Table? 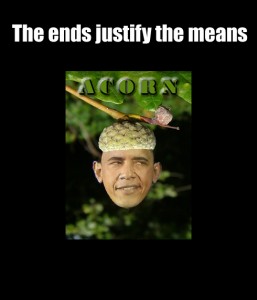 Michelle Bachman is not lying.  It’s in there, it’s now 1,279 pages, and this particular amendment is coming from one of the worst offenders in the financial meltdown – Maxine Waters.

Bachmann, a consistent opponent of ACORN (Association of Community Organizations for Reform Now), said that an amendment given in the House Financial Services Committee could allow the group to sit on an advisory panel that monitors the regulations.

“ACORN may have a seat at the table being on the oversight committee regulating the financial services industry of the United States,” Bachmann said at a press conference. “And that would be a cruel joke.”

The amendment offered by Rep. Maxine Waters (D-Calif.) created Consumer Financial Protection Oversight Board that would need to include five members from the “fields of consumer protection, fair lending and civil rights, representatives of depository institutions that primarily serve under-served communities or representatives of communities that have been significantly impacted by higher-priced mortgage loans.”

The panel does not have the power to create policy but can recommend policies to the director of the Consumer Financial Protection Agency.

Bachmann argued that this provision could allow ACORN to participate on the board. ACORN was temporarily stripped of its federal funding by Congress in September after two conservative activists posing as a pimp and prostitute filmed ACORN employees offering them financial advice.