Ukrainian Hemorrhagic Pneumonia; NOW We Should Be Worried (UPDATED) 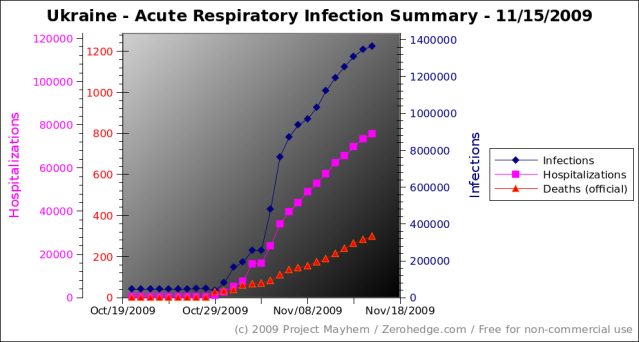 Worried about Swine Flu? Not likely.  I haven’t been worried about swine flu since the last time I had it, and ALL of the people I talk to do not think there is any cause for alarm.  A number of them also agree that there will be a pandemic that kills millions, that the virus will come out of a lab, and it won’t be swine flu. Americans aren’t stupid and they also don’t believe that AIDS occurred naturally.

I have been waiting for the nasty bug to raise it’s ugly head, and now it appears it has, and of course, it isn’t anywhere in the MSM.  Nor is the rapid death toll in Canada in 72 hours, and/or the virus causing it.  Canadian officials are still calling it swine flu.  This bug may have jumped the pond, and it is not anything like the swine flu that has infected 440,000 people worldwide, and killed 5,700.

Welcome to Ukrainian Hemorrhagic Pneumonia; over a million infected and 299 dead since 10.30.09.  These are official reports; I’m not sure I believe the Ukrainian Health Ministry anymore than I believe our White House.

A DEADLY plague could sweep across Europe, doctors fear, after an outbreak of a virus in Ukraine plunged the country and its neighbours into a state of panic.

A cocktail of three flu viruses are reported to have mutated into a single pneumonic plague, which it is believed may be far more dangerous than swine flu. The death toll has reached 189 and more than 1 million people have been infected, most of them in the nine regions of Western Ukraine.

President of Ukraine Viktor Yushchenko has called in the World Health Organisation and a team of nine specialists are carrying out tests in Kiev and Lviv to identify the virus. Samples have been sent to London for analysis.

President Yushchenko said: “People are dying. The epidemic is killing doctors. This is absolutely inconceivable in the 21st Century.”

In a TV interview, the President added: “Unlike similar epidemics in other countries, three causes of serious viral infections came together simultaneously in Ukraine – two seasonal flus and the Californian flu

“Virologists conclude that this combination of infections may produce an even more aggressive new virus as a result of mutation.”

Prime Minister Yulia Tymoshenko has been touring hospitals where victims are being treated and presidential elections in January could be cancelled .

Four men and one woman have died from the flu in Lviv, said emergency hospital chief doctor Myron Borysevych. Two of the dead patients were in the 22-35 age group, with two others over 60. He diagnosed the disease as viral pneumonia.

“We have sent the analyses to Kiev. We don’t believe it’s H1N1 swine flu. Neither do we know what kind of pneumonia it is.”

Universities, schools and kindergartens have been closed, public meetings have been banned and theatres shut. Last week several border crossings in the country were also closed.

Last night reports emerged of profiteering over face masks, which have sold out since the outbreak. There are also incidents of anti-virus medication being sold for exorbitant prices. A spokesman for the World Health Organisation said: “We do not have a time scale for the results of the tests in London, although some preliminary results have been obtained. I cannot tell you what they are.

“We did not have enough of the virus samples so we will have to grow some more before we can come to a conclusive decision about its nature.”

Neighbouring Poland has called on the EU to take action, fearing the mystery virus may spread westwards.

Prime Minister Donald Tusk has written to European Commission President Jose Manuel Barroso and the Swedish Prime Minister, Fredrik Reinfeldt, who holds the EU presidency, saying: “The character of this threat demands that rapid action be undertaken at the European Union level.”

A doctor in Western Ukraine who did not want to be named, said:” We have carried out post mortems on two victims and found their lungs are as black as charcoal.

“They look like they have been burned. It’s terrifying.”

What officials aren’t telling this newspaper is that this virus has many of the hemorrhagic symptoms of the 1918 Flu, or that it is possibly already in India.

Ivano-Frankivsk Oblast
All the six dead young people had symptoms of severe hemorrhagic pneumonia. The disease starts slowly, with temperature rising to 37.2 – 37.3 degrees, slight cough and pain in joints. Nasal catarrh developed at the end of the second or third day. Autopsy revealed that the lungs were soaked with blood, the oblast chief specialist said.

Information on the incidence of influenza and acute respiratory infections and their complications (pneumonia, etc.) as “15” November 2009

H1N1, a new flu strain that’s evolved in pigs, humans and birds, has sickened at least 440,000 people and killed over 5,700 since it was discovered in Mexico and the U.S. in April, the World Health Organization said last week. The WHO estimates seasonal flu causes up to 500,000 deaths a year.

“It’s a bit like Mexico in the beginning,” said John Oxford, professor of virology at Queen Mary’s School of Medicine and Dentistry in London, adding that Ukrainian authorities may not have the scientific resources they need to observe the outbreak closely. “One’s first reaction is that not due to any fault of their own, they’re getting into a bit of a flap.”

It’s unlikely that the virus has mutated and become more deadly, according to Oxford. “It doesn’t fit with the experience of other countries at the moment, so why should the Ukraine be different,” he said.

Ontario’s startling fatalities reported between November 10 and 11 a.m. EST on November 12 catapults the death toll from 37 reported on Nov. 10 to a total of 61. That is twice the figure of dead in Quebec and the highest of any province in Canada.

‘Don’t know what caused the deaths’

Doctors at Sassoon Hospital, who are in the thick of the swine flu battle, are a worried lot. Thirty-five patients with swine flu-like symptoms died in the last 45 days at the hospital, and not one of them tested positive for swine flu. The doctors still don’t know what caused the death of these patients.

Tell the world
“We requested the National Institute of Virology (NIV) to check tissue samples from these patients for eight to 10combinations of the HN virus subtype like H1N2 or H2N2. It is extremely important that the virus is identified so we can decide on the course of treatment,” said Dr Arun Jamkar, dean of Sassoon Hospital, which has been dubbed as the epicentre of the swine flu activity in the state.

On October 28, doctors at Sassoon shared the data on these deaths with the Center for Disease Control, Atlanta, USA, and virologists across the world in a videoconference.

Here is the update from WHO, with no mention of these symptoms.

In addition, 145 deaths in 18 countries were associated with laboratory-confirmed pandemic (H1N1) 2009 virus infection. This raises the total number of deaths reported in the WHO European Region since April 2009 to 471.

There have been 174 reported deaths from acute respiratory infection. Currently, 344 patients are in intensive care. After visiting several cities to the west of the capital, Kyiv, the WHO team of experts continues its investigations into the outbreak. The team has taken part in activities to share clinical experience throughout the country, and concluded that Ukraine’s health facilities are well prepared and medical staff highly motivated to deal with the influx of cases.

The key to this bug is the moment you become ill, (and from everything I have read, the onset is RAPID), go to the hospital. Period. Do Not Wait.

(H/T reader Kathy for putting this video in comments) I will see what I can find out about Dr. Moshe.

********
UPDATE: New Video 11.17.09.
This is being reported as a mutated form of swine flu though doctors have not confirmed it. As noted above, it appears to be a combination of three flu viruses and NOT swine flu.


Important Links to Websites that have daily information: