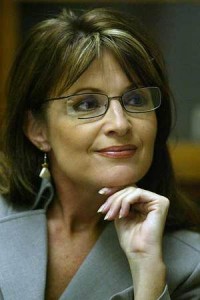 For all those Sarah Palin fans out in the upside-down world of Bambi and Mishy where Americans apologize for breathing, and where if passed, you will be required to obtain a  healthcare plan through numerous outlets – one of which will be the DMV, AND we are letting the UN, Iran, and Russia walk all over us, some good news is coming out of the WSJ.  For those of you that believe that the woman pictured here is not going to be President someday, better start crying in your adult beverage of choice now.  And Olympia, yes, you are making history because that’s all it was ever about – right?  Unfortunately for you, there are real leaders and statesmen, and then there are history chasers.

Sarah Palin fans can expect to see a new Palin political organization surface as her memoir, “Going Rogue: An American Life,” hits the shelves next month.

“There will be an announcement about it coming up,” Palin associate Tim Crawford said Wednesday.

The New York Post reported this week that Palin’s new group will be called “Stand Up For Our Nation.” (News Corp. owns both the Post and The Wall Street Journal as well as HarperCollins Publishers, publisher of Palin’s book.) Crawford, who is treasurer of Palin’s existing political-action committee, SarahPAC, refused to provide any details about the new organization’s purpose or structure.

With a moniker like “Stand Up For Our Nation”, this move leaves little doubt that Sarah Palin is becoming a leader for the conservative movement, and I rather doubt she is going to sit on the sidelines in 2012.   Sarah Palin has exactly the humble beginnings and common sense so required by past great American Statesmen to keep our country safe, and move us forward.

Are y’all ready to watch the liberal left moonbat media start ripping on her again?  She’s going to eat them for breakfast.