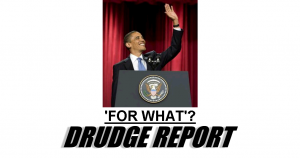 Anybody disagree that the Logistics Monster’s Are You Freakin’ Kidding Me? Award of the Year should go to the Norwegian Nobel Committee for spitting in the faces of the likes of Mother Theresa, Lech Walesa, and Doctors Without Borders when they awarded a Nobel Peace Prize to Barack Obama for…

Drudge Report sums it up succinctly once again:

This event, by far, is the AYFKM? Moment of the Year.  Who needs to wait until the end of the year to decide what the most incredibly moronic maneuver was and who deserves it.  The Nobel Committee gave a coward and an appeaser with no foreign policy initiative, no tangible national experience, and absolutely nada international experience a Nobel for international diplomacy.  This ranks right up there with “everybody wins” in our schools.

Now I guess the committee was able to see the future, right?

Reader Kathy left this comment about the deadline for the NPP:

Since the dead line for the submission of names to be considered for the prize is Feb 1st there is no way he was nominated for anything he did as the fraud in chief, he had only been frauding for 2 weeks.

If this event does not prove the global push for a New World Order by the likes of the Rockefellers, Henry Kissinger, Barack Obama, Bush I,  Bill Clinton, etc., and numerous internationally based critters, I do not know what does.

A few questions to ask yourself:

The lines in the sand are being drawn; which side are you on?

UPDATE: John Bolton On The Award:
I rest my case….