Stop Arguing With The Patriots At The 9.12 March On Washington, D.C. 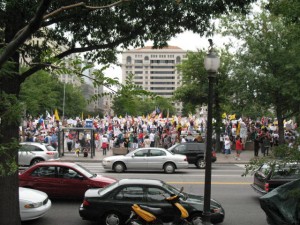 We have told anyone that would listen that the March on Washington D.C. on 9.12.09 started early because there were too many people assembled in Freedom Plaza. This is a photo from 8:30 am when patriots weren’t supposed to assemble until 9am.  The march started an hour and a half early because there was no more room in Freedom Plaza for the assembling patriots.  I personally took photographs of thousands streaming into Freedom Plaza from the feeder streets on foot; wall to wall patriots taking up the sidewalks. At noon the DC police were estimating 1.5 million and buses and people were still pouring in.

Want more corroboration? Make sure to go here and vote up this video!  Please watch the whole vid as there are some great shots and video at the end.

The left and the fringe media can stop arguing with us anytime now….this grassroots movement is growing…and all the backpedalling you see in Congress and the White House is our momentum. Do not believe for one second that YOU ARE NOT making a difference.  Keep the pressure on, and get your family, friends, and neighbors to come on down!