(H/T Kathy for the photo link)

No one seems to know, or want to report how many people were at the DC march this past weekend.  Due to the generosity of my readers, I was there, and I think there was maybe just a few more than just 10’s of thousands.  Click on the photo to enlarge it.

912dc.org has started a photo archive on flickr (use tag 912DC in the search if the link does not work) here.

I have heard reports ranging from 100,000 to 2.1 million.  When I can find an accurate source, I will report it to monster readers.  All I know for sure is that the Capitol Police were reporting an estimate of 1.5 million at noon, and traffic into the city was shut down at some point in the afternoon as more attendees were trying to get to the march.

One of the most interesting comments I heard over and over again was that for each person at the march, there was probably 50 that wanted to be there and couldn’t.  Also, almost everybody I spoke with was surprised at the amount of people that actually showed up, with the open mouthed surprise when they marched down the feeder streets into Freedom Plaza and saw the 1000’s gathered at 8:30 am.  I posted those photos early so that all that could not attend had some kind of idea of what was about to happen.  Many of the attendees made the decision to come at the last minute, and that decision hinged on the fact that someone they knew was going.  I truly believe that this march was more for sending the rest of America a message that they are not alone and that it would be perfectly fine to join our family and come out of the self imposed silence.  I am happy to report my koolaid drinking mother-in-law is off the intravenous feed, and just as amped as the rest of us.

From the first moment when the early buses started arriving on Thursday, I watched as the heartland descended on DC and I also saw the few remaining bloated ticks (Washington Insiders) wander around mouths hanging open and aghast as the t-shirted and blue jean clad masses took over their city.  It was a beauty to behold, and all I could do was grin from ear to ear and laugh.

I spoke to people from all over the country and learned that there was another Hawaiian there, though I was unable to meet her.  If you are reading this Norma, give me a shout out in comments as I would really like to believe that I am not the only one.

The demographics of the crowd was mostly older with, in my opinion, more women, though there were many families with strollers there.  It was interesting to hear the stories of how they reached the city in their different modes of travel with their different accents and speech patterns.  As soon as one patriot would see another it was like one big family reunion, where it did not matter how long you had been away, you were welcomed with open arms.  For those of us that have been fighting this battle against this corrupt government for such a long time, it was a breath of fresh air and a comforting feeling.

Another interesting fact was that the vendors in the city did not seem to know that we were coming as I noticed only two pretzel vendors and one lady selling sodas out of a cooler.  Most of the demonstrators brought their own food and beverages with them and the only thing missing was a semi full of hotdogs, hamburgers, and massive grills.  The feeling in the crowd was calm, respectful and very, very enthusiastically happy about being able to attend with so many other like minded American Patriots.  You have seen the comparison photo between the aftermath of the Bambi inauguration with the trash strewn Capitol grounds and the clean lawn after the 9.12 March.  I, along with many others, picked up little pieces of trash on the way out and deposited it in overflowing garbage cans.  Amazing the good manners of the people that attended from all over the country.

I can also report that the “little people” that live in DC and work in the service industries for the bloated ticks, (my new phrase for the residents of the beltway bubble), did not know what to make of us, the numbers of patriots, the clothing, the accents, etc.  I do not think they are used to seeing the heartland in such a magnitude all over their city.

The DC police went from being suspicious and wary of the crowd early in the morning to polite, relaxed and good humored as they saw millions walking, singing, chanting, and behaving in a manner that they had probably not seen before; no broken windows, no fiery trash cans, no fights, no pepperspray, no SWAT teams in the background.  Probably refreshing for them also.

I also wanted to let you know what I saw in regards to what we hear about the Beltway Bubble and how Washington D.C. is so insulated and out of touch from the rest of the country.  Dear Readers, there is NO COUNTRY outside the city limits of Washington DC.  What I saw on the street corner in front of the Cannon Building on Thursday while demonstrating Nancy Pelosi was unabashed self-importance and actual sneering from the bloated ticks.  As far as they are concerned, there is nothing but cracked earth and desolation outside DC.  It is one thing to hear about the bubble, but another thing totally to see the ticks look down their noses at their bosses.  If Washington D.C. was not our capitol with such a long and distinguished history, I would vote for burning it to the ground and rebuilding a new national capitol somewhere in the heartland; say Kansas or Nebraska filled with representatives that understand that they are servants of the people, and not the recipients of the people’s wealth.  After seeing the ticks scurry like puffed up, self absorbed cockroaches, I cannot wait to fire every last one of them, their staffs, their lobbyists, their servants in waiting, etc.  The Bloated Ticks and their attendants are fat, happy, and at peace with their rape of the American people.  Please keep in mind that the next 10 levels of state leadership is probably just as bad and wants in on the “piggies at the trough motherlode”; they gotta go too!

I wanted to post a few more pictures for my readers.  Let me know if you want to see more after this…. 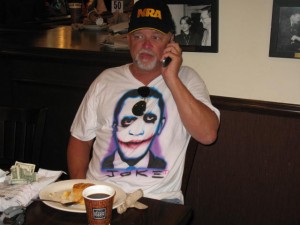 Relaxing at a cafe 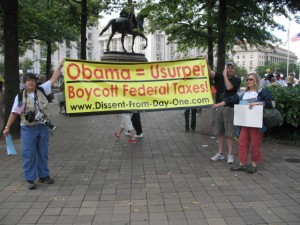 Dissent Has Got To Have His Say 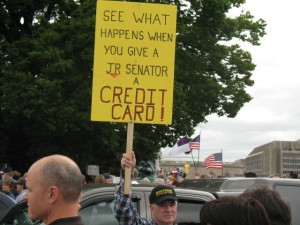 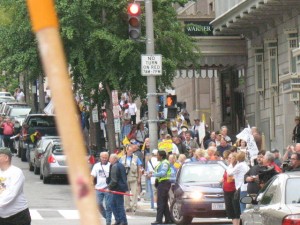 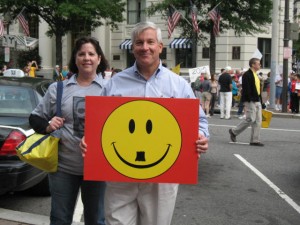 Feeling Good About Hope And Change 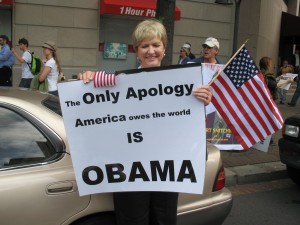 Another Rebuttal To The Apology Tour 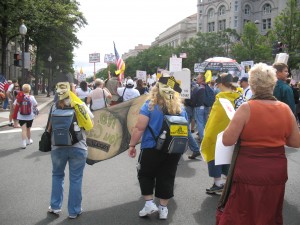 V is for Vendetta 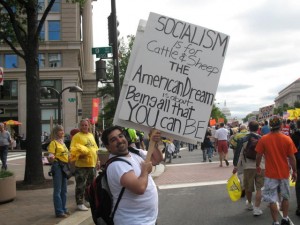 Are You A Sheeple? 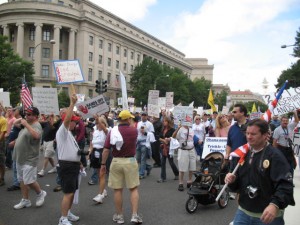 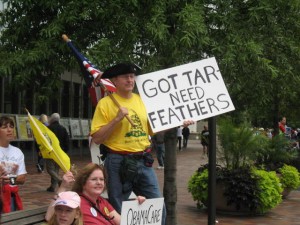 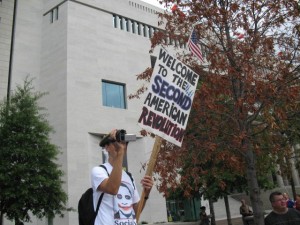 One Of My Favs 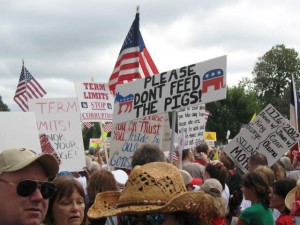 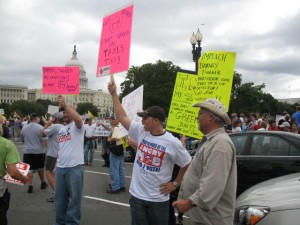 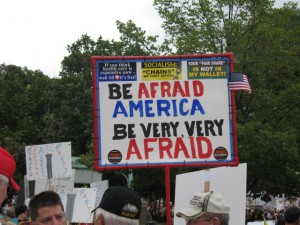 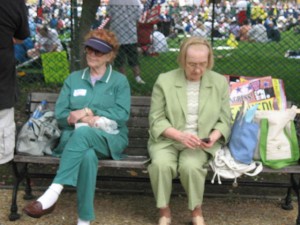 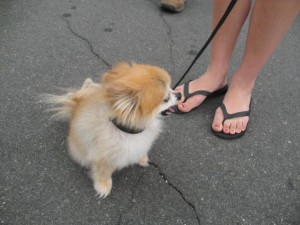 Watch Out For Fluffy! 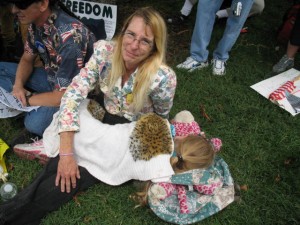 Right Wing Extremism Is So Tiring! 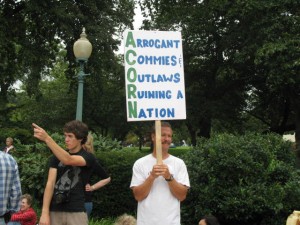 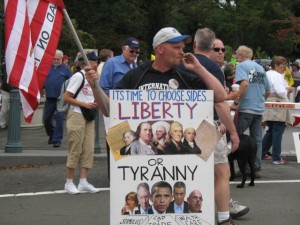 What Side Of The Fence Are You On? 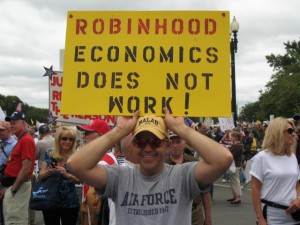 What Was I Saying About Robin Hood? 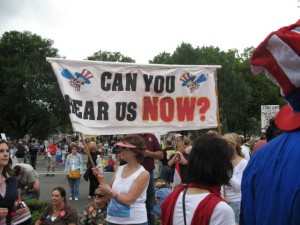 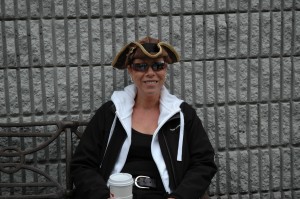 Your Humble Photographer - The Monster

Bad Behavior has blocked 2195 access attempts in the last 7 days.