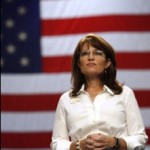 Governor Sarah Palin is about to hold a press conference, and information being reported prior to the PC is stating that not only will she not run for re-election for governor of Alaska, but that she is resigning her governorship and handing over the governorship to Lt. Gov. Sean Parnell at the end of the month.

As soon as I can find video of the press conference, I will embed it, and I will update this post as more information comes in.

UPDATE: Greta is reporting that Sarah signed a letter two weeks ago looking for funding for SarahPac.

UPDATE: It looks like Sarah Palin is stepping down because Alaskans are spending money defending Governor Palin against the political smear campaign and ethics violations.

UPDATE: She is resigning because she doesn’t want to draw a paycheck as a lame duck governor.

“I am determined to take the right path for Alaska even though it is not the easiest path,” Palin said after the announcement, according to a press release from her office. “Once I decided not to run for re-election, I also felt that to embrace the conventional ‘Lame Duck’ status in this particular climate would just be another dose of ‘politics as usual,’ something I campaigned against and will always oppose.”