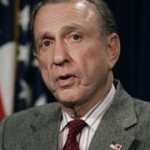 …for being such a chickensh*t liar that he is switching parties from Republican to Democrat.  He says that his beliefs are more in line with the Democrats now, but it really looks like he just wants to continue his 29 year run in the Senate using obot voters after amassing a 5.8 million warchest of contributions from Republicans.  Good luck with that Arlen; there is going to be alot of surprised politicians on both sides of the isle in 2010 (or sooner).

WASHINGTON (AP) — Veteran Republican Sen. Arlen Specter of Pennsylvania disclosed plans Tuesday to switch parties, a move intended to boost his chances of winning re-election next year that also will push Democrats within one seat of a 60-vote filibuster-resistant majority.

“I now find my political philosophy more in line with Democrats than Republicans,” Specter said in a statement posted on a Web site devoted to Pennsylvania politics and confirmed by his office. Several Senate officials said a formal announcement was expected later in the day or Wednesday

President Barack Obama called Specter almost immediately after he was informed of the decision to say the Democratic Party was “thrilled to have you,” according to a White House official.

Specter, 79 and in his fifth term, is one of a handful of Republican moderates remaining in Congress in a party now dominated by conservatives. Several officials said secret talks that preceded his decision reached into the White House, involving both Obama and Vice President Joseph Biden, a longtime colleague in the Senate. Pennsylvania Gov. Ed Rendell as well as Democratic leaders in Congress also were involved, added the officials, who spoke on condition of anonymity because they were not authorized to disclose details.

He has publicly acknowledged in recent months that in order to win a sixth term, he would need the support of thousands of Pennsylvania Republicans who sided with Obama in last fall’s presidential election.

“I am unwilling to have my twenty-nine year Senate record judged by the Pennsylvania Republican primary electorate,” he said in the statement.

Asked by a reporter what he had to say to his constituents, Specter replied with a smile, “I don’t have to say anything to them. They said it to me.”