We Told You Obama Is A Socialist! (And Michelle Is The Real Power)

Someone is listening, thinking, paying attention, and HE HAS A LARGE MICROPHONE:

If you aren’t DVRing Glenn Beck on Fox News, why not?

A few days ago I suggested that we start a pool to see how long it was going to take for Obama’s administration to collapse because of his ineptitude, incredibly poor judgement with his cabinet picks, and losing his momentum at such a critical moment in our history because he is weak and just not freakin’ qualified to be Leader Of The Free World. The proof is in the pudding; he has Mishy running all over propping up the troops and pushing the depression bill:

As she prepares to step out beyond her role as the self-described “mom in chief,” Michelle Obama has been busy behind the scenes crafting a policy-driven agenda that will bring working-family issues into the White House — and she’s surrounded herself with a team of veteran political insiders and seasoned policy advocates to do it.

Aides are quick to say the first lady isn’t planning on having an independent policy power center in the East Wing. “Our job is to think through with the president and with the president’s team and assist in dialogue about policy. But the president is the policymaker,” said chief of staff Jackie Norris. In other words, it isn’t likely that Michelle Obama will be on the phone introducing herself to lawmakers on Capitol Hill, like Hillary Clinton did as first lady. At least not yet.

But as Obama made her first official trip outside the White House on Monday — to the Department of Education — the shape and direction of her office, with advisers who have worked for Bill Clinton, Al Gore and John Edwards, clearly bear a lot more resemblance to Clinton’s style than to that of Laura Bush.

The credentials of Michelle Obama’s new team “give us a glimpse of the future,” said Carl Anthony Sferrazza, a former speechwriter for Nancy Reagan who also wrote the introduction to Hillary Clinton’s “Invitation to the White House: At Home With History.”

At her event yesterday, she caught herself using the word “we” to describe her husband’s administration — and was careful to shift gears. (She said this ALOT!)


“We’re going to be making investments, and I shouldn’t say ‘we,’ but the administration ‘we.’ … With these investments we are going to create good jobs as we renovate and modernize more than 10,000 schools and improve the learning environment,” Obama said, making a pitch for her husband’s economic stimulus plan.

Aides said she will visit every Cabinet-level federal agency in the coming weeks in a kind of get-to-know-you tour. She’ll also seek to expand her campaign role as “listener” on the national stage, traveling from time to time. First stop is her local community, however.

or how about this?

In three short days, Michelle Obama has expanded on her role as mom-in-chief to take on new and somewhat unusual duties for a first lady – actively pitching her husband’s economic stimulus package, now facing trouble in the Senate. (emphasis mine.  You know it’s bad when Mishy and her big mouth have to be brought out.  She is almost as bad as Biden.)


As she makes a “get-to-know-you” tour of federal agencies, Obama is using her considerable platform to amplify the message coming out of the White House: pass the stimulus plan, and pass it now. Meanwhile, President Barack Obama has ramped up his efforts as well, reaching out to Republicans one-on-one, doing back-to-back TV interviews and tapping his grassroots network through the Internet.
The White House seems to be betting that Michelle Obama can work some of her old campaign magic—she was nicknamed “the closer,” because she was so effective at getting undecided voters on board.

Some experts said it was surprising to hear a new first lady making such a direct political appeal for her husband’s specific policy initiatives, and so soon after moving into the White House.

We saw this coming miles away….the obots….not so much.

Just another little tidbit; His Majesty’s approval rating is sinking: 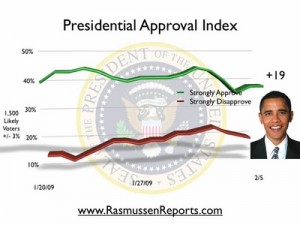