The Do-Over…Who Forgot The Bible? 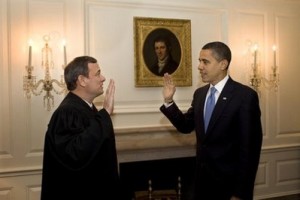 (A brief but warm welcome to the Defense Contract Management Agency for stopping by this evening.)

Now to get to the point.  It seems that MLK Jr. Jr.* decided that since he and Justice Roberts were so incredibly nervous yesterday, that it might be a good idea to have a do-over of the oath to assume the mantle of the presidency.  Personally, I thought that neither of them were taking what they were doing very seriously and/or they were nervous because they both know they were committing the greatest fraud ever seen in this country by swearing in a president-elect that will not prove he is a natural born citizen and eligible to be president.  All of that aside, you would think they would get it right the second time; not so dear readers.

Breaking: Obama and Roberts Blow The Swearing In a Second Time

Even though the White House counsel said it wasn’t necessary (full press release, Chief Justice John Roberts and President-elect Barack Obama took a second crack at the swearing in this evening. Knowing how things went the first time you would think there’d be no way they’d mess it up a second time.

Here’s how it went (from pool report):

At 735 pm, Roberts administred the oath of office again to obama in the map room. Robert gibbs said the wh counsel, greg craig, believes the oath was fine Tuesday, but one word was out of sequence so they did this out of a “an abundance of caution.”
“We decided it was so much fun…” Obama joked while sitting on a couch.
Obama stood and walked over to make small talk with pool as roberts donned his black robe.
“Are you ready to take the oath?” Roberts asked.
“I am, and we’re going to do it very slowly,” obama replied.
Oath took 25 seconds.
After a flawless recitation, roberts smiled and said, “congratulations, again.”
Obama said, “thank you, sir.”
Smattering of applause.
“All right.” Obama said. “The bad news for the pool is there’s 12 more balls.”

That works out. It was Obama, Roberts and four pool reporters. That’s twelve.

Ahhh, but not so fast. An addendum to a later pool report notes the following detail:

Sorry, meant to add: obama raised his right hand and left was at his side.
There was No Bible.

There was no Bible. There was no Bible? Are you kidding me? After all the trouble they went through to be sworn in on the Lincoln Bible they didn’t they’d need one for the second shot? What, were they afraid to pay the late fees at the Library of Congress? Did they really think, oh no one will care about that detail? Why didn’t Roberts just say Kenya instead of America by mistake while they were at it?

Yes, dear readers, the White House full of Obots who salaries we are paying forgot a bible, any bible…doesn’t the desk have a bible in it; and can we have a do-over on our credit cards, mortgages, crashed 401ks, The Fed, a monetary system back by precious metals, Nancy Pelosi, Harry Reid, the whole cowardly Congress…?

*Hat Tip to Shtuey of Oh…My Valve! for the new moniker.

Bad Behavior has blocked 3114 access attempts in the last 7 days.