Is Everybody Sick To Death Of Hank Paulson Yet? 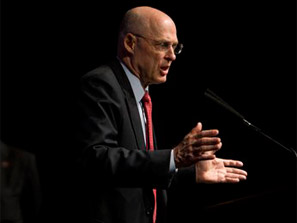 If you do not think Hank Paulson is an enemy of the United States after everything he has done in the last six months in regards to the original 3 Page Bailout Proposal, and now our Tax Dollars (Bailout Money) disappearing into the ether, take a gander at this!

Treasury antes up in auto bailout


Using financial markets rescue funds, Treasury will purchase $5 billion in senior preferred equity from GMAC LLC, and up to $1 billion more will be lent to GM itself so the automaker can participate in a rights offering at GMAC, which has wanted to reorganize itself as a bank holding company. (WTF? Are You Freakin’ Kidding Me?)


GMAC won approval from the Federal Reserve last week to become a bank holding company, but that was contingent on the auto and home loan provider raising at least $30 billion in capital. Treasury’s announcement would appear to move GMAC closer to that goal, and a GM spokeswoman was optimistic Monday night.

From Treasury’s standpoint, the new commitment raises again the pressure on the White House, Congress and the incoming Obama administration to come together on some plan for releasing the second half of the $700 billion financial rescue fund enacted in October. (Paulson wants the rest of the money after the first $350 Billion disappeared and this is just another strong-arm tactic.)

At what point are Americans going to say “ENOUGH IS ENOUGH” and march on D.C. to show our disapproval of ONE MAN having so much power?

Are we going to allow Hank Paulson and Ben Bernanke to destroy our monetary system by throwing good money after bad, AND printing as much money as they need creating super-inflation and a diminishing dollar?

Wake Up America; these guys are not smarter than us unless you count shady, greedy, self-enrichment as intelligent qualities.