We All Knew This… 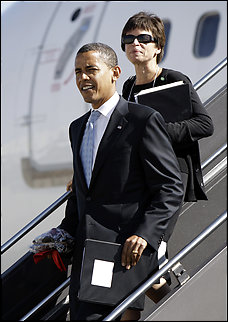 For those of us that have not supported the Hopey-Changey Train from the very beginning, none of this is a surprise, and the waiting for the truth about Emanuel to surface is not a surprise either since we all know that some very powerful people are protecting The One, His Wife and His “Second Wife”, Valerie Jarrett.

From the Chicago Sun Times:

President-elect Barack Obama’s incoming chief of staff Rahm Emanuel had a deeper involvement in pressing for a U.S. Senate seat appointment than previously reported, the Sun-Times has learned. Emanuel had direct discussions about the seat with Gov. Blagojevich, who is is accused of trying to auction it to the highest bidder.

Emanuel talked with the governor in the days following the Nov. 4 election and pressed early on for the appointment of Valerie Jarrett to the post, sources with knowledge of the conversations told the Sun-Times. There was no indication from sources that Emanuel brokered a deal, however.

A source with the Obama camp strongly denied Emanuel spoke with the governor directly about the seat, saying Emanuel only spoke with Blagojevich once recently to say he was taking the chief of staff post.

But sources with knowledge of the investigation said Blagojevich told his aides about the calls with Emanuel and sometimes gave them directions afterward. Sources said that early on, Emanuel pushed for the appointment of Jarrett to the governor and his staff and asked that it be done by a certain date.

At least some of the conversations between Emanuel and Blagojevich were likely caught on tape, sources said.

After Jarrett took herself out of the running in mid-November, Emanuel submitted a list of suitable names to the governor’s camp that didn’t include her name.

If you have not figured out that Valerie Jarrett is one of the big powerbrokers behind The One who a very long time ago hooked her star to his train, better start digging.

So I think my question to Valerie is, “If Bambi thinks so much of women, why doesn’t he pay the women working for him the same as the men?”