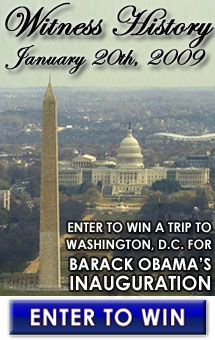 As many of you may know, the election was “decided” on November 4th, 2008 and the Dalai Bama became the President Elect.  I was one of many that expected the campaign to END!  Nothing is as it seems in Obamaland; Bambi continues to campaign and though he has oodles of cash in his war chest and some $100 Million for his week long Coronation, he is pimping out his staff to pay off Hillary’s and the DNC’s debts.   WTF?  I am thinking he wants every single American to be COMPLETELY BROKE so that we will be forced to turn to the government to take care of us.  Please remember that McCain was kicking Barack’s behind until we all of a sudden had an “economic meltdown” which was damn convenient.  Please do not be a sheeple and think that the markets were not manipulated to achieve that result.

In the course of the last few weeks, numerous emails have been sent to Dems asking for money, support, and continued brainwashing of the masses thru house parties.  My apologies for the length of this post, but I thought it might be helpful to see the emails and video one right after the other.

All of these emails and marketing schemes came in a small window of time; which begs the question, was this a planned campaign?  Sure does look like it, and December 15th seems to be such an important date in Obamaland.   Notice that none of the emails or the video wished anyone “Season’s Greetings” in the traditional hat tip to our Christian nation, our Jewish brethren, or Yule for those Pagans among us?

Are we supposed to Worship Obama this Xmas?

Some people have suggested that The Narcissist is so insecure that he requires daily stroking and adoration from millions to make him feel better.  I think there is more to it than that.  Barack Obama is an illegitimate President Elect on more than one level starting with the concealment of any and all personal papers that have to do with his past, and leading to the caucus fraud and delegate intimidation at the Denver Convention.  He knows that he is not eligible nor qualified to be the President and is trying to shore up his support for when and IF he is inaugurated in order to push through numerous radical executive orders and bills passed by Nancy and her Gang of Thieves without the American public marching on Washington.

Now is not the time to stop paying attention to what the Obama Campaign is doing, and rest assured – they are still campaigning to get every single one of us to drink the koolaid, go to sleep, and let the rape and pillage of average Americans continue under this new administration.

Message to Obama From This American: Get Over Yourself!

If you want to get involved as either a single citizen or as a blogger who wants to join a synchronized media movement, than go to Wake Up America’s Get Involved page.  For those bloggers out there, make sure you check the boxes Watch Washington and Link To Your Website besides putting your URL in the Group Affiliations box.  Come Join Tsunami Media!

special message to the members of the Obama/Biden

debt. We really appreciate Joe Biden‘s help, and I

know you’re just as proud of Hillary as I am. Now

we’re looking to close this past chapter of Hillary’s

story as she begins a new one and we need your help.

message and join him in helping Hillary.

Thank you so much for everything you have done.

President-elect Obama and I have been assembling

our team, and we plan to hit the ground running next month.

We want to be ready to go, and that’s why I’m

asking you to help us honor an outstanding

commitment we made during the election.

one of the vital members of our team and our

debt. That’s the money her campaign owes to

the vendors across the country that make our political process possible.

Barack and I had the deepest respect for Hillary

as an opponent on the campaign trail. Her

strengthened Barack as a candidate and tested our movement for change.

We welcome Hillary as a partner in our

administration, and I hope you will show

your support by helping Barack fulfill our campaign promise.

Will you make a contribution of $100 or

I saw your generosity and commitment to this

team throughout the election, and I know we can do it.

In the general election, Hillary was one of our

strongest advocates. She traveled the country

and did more than 70 events, raising money

and bringing new supporters into our campaign.

As Secretary of State, she will be indispensable

in furthering Barack’s agenda for change.

Let’s welcome Hillary to the team and thank

her for her efforts in support of our campaign

by helping to retire her debt to the hard-working

individuals and small businesses that were a part of the election:

Your support and generosity got us this far,

and I know I can count on it now.

1. Please join me on Monday, December 15
to help retire Hillary's debt at:
Hillary Live!
with Senator Hillary Clinton and

can all sit together.

If you live outside of New York, this
is a great time to come in, or
contribute to make the event a huge
success.  If you can buy a ticket
but not attend, there are student
volunteers who would be thrilled
to fill a seat.
Looking forward to hearing from you
and seeing you on the 15th - for Hillary!!!

This week President-elect Obama announced his intention to nominate Hillary to be Secretary of State.  If confirmed, I know she will make an extraordinary contribution to the Obama Administration and to our country.

I started the William J. Clinton Foundation to focus on areas in which I felt I could make the most difference as a private citizen.  Since 2001, the Clinton Foundation has grown into a global nongovernmental organization, with staff and volunteer of 1,100 in more than 40 countries.

In the past seven years, your support of the Foundation has had a considerable impact on the lives of hundreds of millions throughout the world: 1.4 million people living with HIV/AIDS are now on life saving treatment through the efforts of the Clinton HIV/AIDS Initiative; 40 of the world’s largest cities are working with the Clinton Climate Initiative to reduce greenhouse gas emissions; more than 1 million children have pledged to lead healthier lifestyles as part of the Alliance for a Healthier Generation’s fight against childhood obesity; and members of the Clinton Global Initiative (CGI) have made more than 1,200 commitments that have improved 200 million lives in 150 countries.  Indeed, your support has been the necessary ingredient for this success – and I am grateful to you for investing in the Foundation and the work that it does.

In preparation for Hillary joining the Obama Administration, President-elect Obama has asked that the Foundation publicly share the names of its supporters, both past and future.  I fully appreciate and respect the fact that, as with many other 501(c))(3) non-profit organizations, you may have given to the Foundation with the expectation that you were free to choose whether and how to share the news of your generosity.  Given the nature of this historic nomination and the importance of ensuring against even the suggestion of an appearance of a conflict of interest between Hillary’s duties and the work of the Clinton Foundation, I am reaching out to you to share our plans for publishing the names of the Foundation’s donors.

I hope to have your understanding and support as we take this step.  Should you have any questions about this matter, please contact the Foundation’s Little Rock office at (501) 748-0419 by December 15, 2008.

Finally, I want to say once again how grateful I am to you and so many people who have continued to contribute to the Foundation and the causes we are working on all around the world.  That kind of support is even more important at this time in history, when the world economic crisis requires the Foundation to secure even more donors at modest levels to continue the critical work that we are engaged in.

Thank you once again for your generosity and for your support of the work of the Clinton Foundation.

You can also receive an Obama Winter Hat with a donation of $25 to the DNC because they are oh so in debt.  If you order by DECEMBER 15TH, you have guaranteed receipt by December 25th. 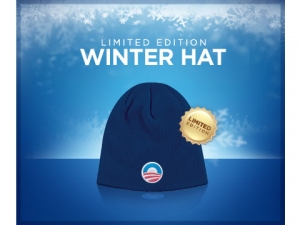 You also have receive an Obama Calendar for just a $35donation to the DNC.