The Whining Ratchets Up A Notch 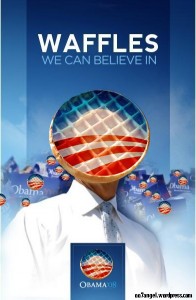 There is a reason the graphic to the left exists.  It was created during the campaign because some Americans were actually paying attention to words and deeds and not just closing their eyes, putting their hands in the air and “believing”.

The Progressive Liberal Democrats are now getting their panties in a bunch.  We warned them and they called us racists.

We told them that a completely unqualified and inexperienced senator with 143 days in the Senate before he started running for the Presidency, who also voted more than 100 times “present” and who would not reveal any important documents about himself or his past, was a LIAR.  They weren’t listening then and now they are wondering why The One is appointing a centrist cabinet. From the Washington Post:

This Wasn’t Quite the Change We Pictured

The more things change, the more they stay . . . well, you know.

For some progressives, Obama’s opening moves may not feel like the change they anticipated. But there’s no rebellion yet at hand. Many are probably holding their breath and waiting to see whether Obama can hijack the establishment for progressive ends.

And looking at President-elect Barack Obama’s top appointments, it’s easy to wonder whether convention has triumphed over change — and centrists over progressives.

It’s no surprise that many progressives are — depending on whom you ask — disappointed, irritated or fit to be tied. Sure, Obama’s appointments do represent change — that is, change from the widely unpopular Bush-Cheney status quo. But do these appointments amount to the kind of change that progressives, who were an essential part of Obama’s political base during the campaign, can really believe in?

Perhaps Obama is trying to pull off something subtle — a sort of stealth liberalism draped in bipartisan centrism. But it’s understandable that progressives are worried. “I feel incredibly frustrated,” OpenLeft blogger Chris Bowers exclaimed. “Even after two landslide elections in a row, are our only governing options as a nation either all right-wing Republicans, or a centrist mixture of Democrats and Republicans? Isn’t there ever a point when we can get an actual Democratic administration?” And he asks, “Why isn’t there a single member of Obama’s cabinet who will be advising him from the left?” Writers at the Nation have decried Obama’s national security team as a “kettle of hawks,” denounced his economic aides as acolytes of “recycled Clintonism” who fancy “straight-up neoliberal deference to the market,” and assailed the retaining of Gates as a move that “has a dispiriting, stay-the-course feel to it.”

The other day, two prominent labor officials who toiled mighty hard for Obama during the campaign told me they had this message for the new president: Please, please give us David Bonior as labor secretary. They were referring to the populist former House member who has been a leading critic of NAFTA-like trade pacts. “Don’t we deserve at least one Cabinet appointment?” one remarked.

I, too, have huffed about Obama’s staffing decisions. It remains a mystery to me why Obama would want to bring into his Big Tent the Clinton circus, which frequently features excessive spin, backstabbing, leaking and messy melodrama. Sen. Clinton is a smart woman who has stature and globetrotting experience. But as health-care czar in her husband’s administration, she set back that cause, which is near and dear to the hearts of progressives, by nearly two decades.

So with these hawkish, Rubin-esque, middle-of-the-road picks, has Obama abandoned the folks who brought him to the dance?

My hunch is that Obama has made a calculation. In constructing his administration, he has decided not to create a (liberal) Washington counter-establishment. Instead, he’s fashioning a bipartisan, centrist-loaded version of the Washington establishment to carry out his policies, which do tilt to the left. (And good news for the establishmentarians: Having screwed up on Iraq or the economy is no disqualification.) When asked at a Nov. 26 news conference whether his appointments of old Washington hands indicated that his administration was not going to be a festival of change, Obama replied, “What we are going to do is combine experience with fresh thinking. But understand where the — the vision for change comes from first and foremost. It comes from me.” His job, he added, was to “make sure . . . that my team is implementing” his policies. In other words, la change, c’est moi. (This really makes me think dictatorship…how about you?)

For some progressives, Obama’s opening moves may not feel like the change they anticipated. But there’s no rebellion yet at hand. Many are probably holding their breath and waiting to see whether Obama can hijack the establishment for progressive ends

I would love for y’all not to hold your breath.  Watchin’ you turn differing shades of red to purple as you find out how badly you have been betrayed will be very entertaining.  This Is On You! Own It!