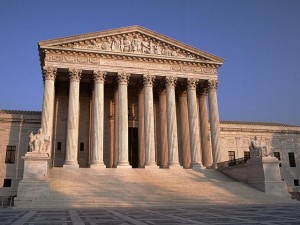 As has been reported by Leo Donofrio’s own site, Natural Born Citizen, his suit against Barack Obama, John McCain and  Roger Calero was to be heard in conference before all nine justices yesterday, December 5th, 2008. Here is what is being reported in the Washington Times today:

The Supreme Court held off Friday on deciding whether to grant a hearing in a long-shot lawsuit that would decide whether Barack Obama can constitutionally become president as a “natural born” U.S. citizen.

The Friday list of court orders that denies or grants hearings did not mention the lawsuit, which says Mr. Obama should be disqualified from the presidency because he purportedly acquired the same British citizenship that his father had when he was born.

A spokesman for the court said the decision on whether to hear the suit brought by retired New Jersey lawyer Leo Donofrio is likely to be announced next week.

My theory after reading  the snip from the WT is that the justices conferenced about this case yesterday, know that Donofrio has all his ducks in a row, and are trying to figure out how to throw this nuclear potato at someone else.  As Shtuey has said several times, the social contract has definitely been broken.