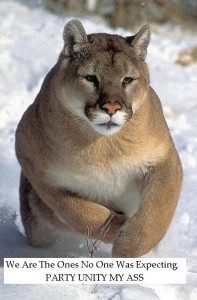 I want to give a huge thank you to baj for dropping this comment tidbit on the Monster because EVERYBODY needs to know that Americans are starting to stand together and one by one we are demanding in the most legal way possible for verification of Barack Obama’s citizenship due to the fact that his whole past has basically been scrubbed clean and the only historical facts we have are coming out of his memoirs.

I also want to stand up and applaud Steve Marquis and People’s Voice for filing this lawsuit.

The complaint seeks specifically that the office of the Washington Secretary of State verify and certify that Mr. Obama is or is not a “natural born” citizen by producing original or certified verifiable official documents. The lawsuit argues that this certification should take place before the election to preclude a constitutional crisis and likely civil unrest should such certification, after the election, prove that Mr. Obama was not qualified for office.

The Complaint argues that the Secretary of State has the authority and duty to not only certify the voters but also and most importantly the candidates and in so doing prevent the wholesale disenfranchisement of voters who would had had an opportunity to choose from qualified candidates had the certification preceded the election process.

At this point, Mr. Obama has not allowed independent or official access to his birth records nor supporting hospital records. The Hawaii Health Department has violated Federal law by ignored formal Freedom of Information requests for the same. Do to the facts and numerous other allegations that would challenge Mr. Obama’s fundamental qualifications for office, a Federal lawsuit was filed and is currently being heard in District Court, Pennsylvania.

Mr. Obama failed to respond to the District Court’s request to produce or allow access to the official documents (should they exist) and instead filed a motion to dismiss arguing the Plaintiff had no “standing” or right to know. This non-response as of 9/24/2008 in Federal court casts doubt on the veracity of the electoral system and is the principal reason for this lawsuit. The late entry of this suit is due in principal part to Mr. Obama’s delay and subsequent non response to reasonable request for valid certificates. Multiple requests for early certification to the Office of the Secretary of State has been rejected.

The Washington Secretary of State Office is specifically charged with certifying and guaranteeing the veracity of official documents and overseeing the elections to wit the people’s confidence in the fundamental aspect of democracy is maintained. To date, in this regard, Secretary of State Sam Reed has not carried out that fundamental duty.

This lawsuit demands injunctive relief directing Sam Reed, Secretary of State, carry out the duty of his office in this regard answering the formal complaints for verification of Mr. Obama and any other candidate appearing on the ballots issues through his office for which formal complaints have been received.