Obama, Odinga, Kenya And The MSM… 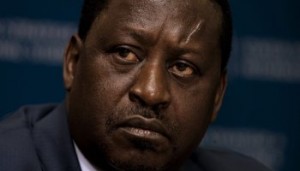 Holy Bejesus Batman!  My repost of Obama – ODM Candidate For President by Jacquerie is burning up the internet and whether that post had anything to do with it or not, The Washington Times has finally decided to jump into the fray and has covered this topic yesterday with an article called HYMAN: Obama’s Kenya Ghosts.

It is actually possible that this article in the MSM might bring more attention to yet another disturbing association that Barack Obama maintains.  It continues to highlight the question “Who The Hell Is Barack Obama?  I do not believe that accepting the marketed image of Obama lock, stock, and barrel would be either wise or advisable at this point.  John McCain is an open book; Barack on the other hand has more and more strange connections that are just coming to light.  Stay tuned for an upcoming article highlighting the tangled web that Barack appears to be the center of.

About 50 parishioners were locked into the Assemblies of God church before it was set ablaze. They were mostly women and children. Those who tried to flee were hacked to death by machete-wielding members of a mob numbering 2,000.

The 2008 New Year Day atrocity in the Kenyan village Eldoret, about 185 miles northwest of Nairobi, had all the markings of the Rwanda genocide of a decade earlier.

By mid-February 2008, more than 1,500 Kenyans were killed. Many were slain by machete-armed attackers. More than 500,000 were displaced by the religious strife. Villages lay in ruin. Many of the atrocities were perpetrated by Muslims against Christians.

The violence was led by supporters of Raila Odinga, the opposition leader who lost the Dec. 27, 2007, presidential election by more than 230,000 votes. Odinga supporters began the genocide hours after the final election results were announced Dec. 30. Mr. Odinga was a member of Parliament representing an area in western Kenya, heavily populated by the Luo tribe, and the birthplace of Barack Obama‘s father.

Mr. Odinga had the backing of Kenya’s Muslim community heading into the election. For months he denied any ties to Muslim leaders, but fell silent when Sheik Abdullahi Abdi, chairman of the National Muslim Leaders Forum, appeared on Kenya television displaying a memorandum of understanding signed on Aug. 29, 2007, by Mr. Odinga and the Muslim leader. Mr. Odinga then denied his denials.

The details of the MOU were shocking. In return for Muslim backing, Mr. Odinga promised to impose a number of measures favored by Muslims if he were elected president. Among these were recognition of “Islam as the only true religion,” Islamic leaders would have an “oversight role to monitor activities of ALL other religions [emphasis in original],” installation of Shariah courts in every jurisdiction, a ban on Christian preaching, replacement of the police commissioner who “allowed himself to be used by heathens and Zionists,” adoption of a women’s dress code, and bans on alcohol and pork.

This was not Mr. Odinga’s first brush with notoriety. Like his father, Jaramogi Oginga Odinga, the main opposition leader in the 1960s and 1970s, Raila Odinga is a Marxist He graduated from East Germany’s Magdeburg University in 1970 on a scholarship provided by the East German government. He named his oldest son after Fidel Castro.

Initially, Mr. Odinga was not the favored opposition candidate to stand in the 2007 election against President Mwai Kibaki, who was seeking his second term. However, he received a tremendous boost when Sen. Barack Obama arrived in Kenya in August 2006 to campaign on his behalf. Mr. Obama denies that supporting Mr. Odinga was the intention of his trip, but his actions and local media reports tell otherwise.

Mr. Odinga and Mr. Obama were nearly inseparable throughout Mr. Obama’s six-day stay. The two traveled together throughout Kenya and Mr. Obama spoke on behalf of Mr. Odinga at numerous rallies. In contrast, Mr. Obama had only criticism for Kibaki. He lashed out against the Kenyan government shortly after meeting with the president on Aug. 25. “The [Kenyan] people have to suffer over corruption perpetrated by government officials,” Mr. Obama announced.

“Kenyans are now yearning for change,” he declared. The intent of Mr. Obama’s remarks and actions was transparent to Kenyans – he was firmly behind Mr. Odinga.

Mr. Odinga and Mr. Obama’s father were both from the Luo community, the second-largest tribe in Kenya, but their ties run much deeper. Mr. Odinga told a stunned BBC Radio interviewer the reason why he and Mr. Obama were staying in near daily telephone contact was because they were cousins. In a Jan. 8, 2008, interview, Mr. Odinga said Mr. Obama had called him twice the day before while campaigning in the New Hampshire primary before adding, “Barack Obama’s father is my maternal uncle.”

Mr. Obama’s judgment is seriously called into question when he backs an official with troubling ties to Muslim extremists and whose supporters practice ethnic cleansing and genocide. It was Islamic extremists in Kenya who bombed the U.S. Embassy in 1998, killing more than 200 and injuring thousands. None of this has dissuaded Mr. Obama from maintaining disturbing loyalties.

I am thinking that the last paragraph pretty much sums it up.  Mr. Obama maintains disturbing loyalties, but it is up to the American public to make up their own minds. 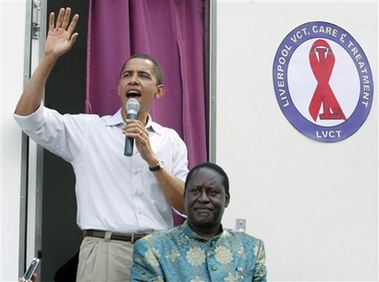