The True Culprit; The MSM

So the current news flash is that Congressman John Lewis of Georgia is making volatile statements about the McCain/Palin ticket in regards to creating hatred and division.  I do not personally know Mr. Lewis, so therefore I cannot attest to his intelligence or stupidity but here is the story from Jonathan Martin, and one would think that any lawmakers with a D attached to their names these days would be very careful with their statements, considering the connections between Fannie, Freddie, Acorn, Obama, and the Dems.

“What I am seeing reminds me too much of another destructive period in American history,” Lewis said in a statement issued today for Politico’s Arena forum.  “Sen. McCain and Gov. Palin are sowing the seeds of hatred and division, and there is no need for this hostility in our political discourse.”

I would like to inform you Mr. Lewis, the seeds of hatred, loathing and division were sowed back in the primaries with the blatant disregard for truthful reporting and bias by the MSM.  Had the MSM done their job and truthfully reported events and asked the hard questions that Americans want to know the answers to in order to be able to make an informed decision, Barack Obama would not be the Democratic Presidential Candidate.period.

Lewis didn’t accuse McCain of imitating Wallace, but suggested there were similarities.

How could you possibly suggest anything along these lines about John McCain.  The sleeping giant is awake now and we know who is creating the division in our country.  We know that the polling being done is over sampling african americans in order to slant the numbers and the other reason that McCain is trailing in the polls is because he is a gentleman with good manners, and chose not to bring these questions up until now.  He was probably expecting the Media to do their jobs, just like the rest of us earlier in the year.    We all know another presidential primary candidate that waited too long to ask the messy questions; did not matter then though, the MSM ignored it, and then lead the charge in the blatant sexism towards Senator Clinton.  Your comments and innuendos go way over the top Mr. Lewis.  Who is sowing the seeds of division now?

“George Wallace never threw a bomb,” Lewis noted.  “He never fired a gun, but he created the climate and the conditions that encouraged vicious attacks against innocent Americans who were simply trying to exercise their constitutional rights. Because of this atmosphere of hate, four little girls were killed on Sunday morning when a church was bombed in Birmingham, Alabama.”

“As public figures with the power to influence and persuade, Sen. McCain and Gov. Palin are playing with fire, and if they are not careful, that fire will consume us all,” Lewis said today. “They are playing a very dangerous game that disregards the value of the political process and cheapens our entire democracy. We can do better. The American people deserve better.”

I agree, we do deserve better.  Can we have Hillary back now?  The only people playing with fire right now are the Democratic Party for disenfranchising so many democrats with their selected candidate that was not properly vetted by them, and guess who, THE MSM!  The Democratic Party is also in the hot seat for striking down the housing reform bill that John McCain co-sponsored in 2005 that would have reined in Fannie and Freddie, and possibly averted the economic hurricane we are now experiencing.

McCain responded with disappointment, but also a challenge to Obama.

“I am saddened that John Lewis, a man I’ve always admired, would make such a brazen and baseless attack on my character and the character of the thousands of hardworking Americans who come to our events to cheer for the kind of reform that will put America on the right track,” the GOP nominee said in a statement this afternoon.

It has never been okay to call someone a racist, yet anyone that does not support Obama has been called racist by Obama supporters, and guess who, the MSM!  We are so incredibly desensitized to it by now that it just slides off us, like water from a duck’s back.  If one even thinks about questioning Obama about anything, then you are a racist.   Politics of hope and change, or Politics of Division?

He added: “I call on Senator Obama to immediately and personally repudiate these outrageous and divisive comments that are so clearly designed to shut down debate 24 days before the election. Our country must return to the important debate about the path forward for America.”

Obama’s campaign distanced themselves from Lewis’s Wallace language but took a shot at Palin for some of her tough charges of late.

Once again we see the Obama camp “distance” themselves from something, instead of telling their surrogate to apologize, while McCain is actually being a leader and telling his supporters to calm down and be respectful.  Anyone seeing the true leader here?  Please tell me who you think is mature and walking in the light?

Right on the heels of not telling Mr. Lewis that he is way over the line, the Obama camp takes a shot at Governor Palin.  Why do I feel like I am back in high school again? Maybe that is because all the talking  heads I ever see directly attached to the Obama camp were not even born when most of us started voting, i.e. Bill Burton.

The attacks and insults are what happens to people that speak the truth about Obama and Crew.  Politics of hope, change and unity right there at the forefront.

“Senator Obama does not believe that John McCain or his policy criticism is in any way comparable to George Wallace or his segregationist policies,” said Obama spokesman Bill Burton.  “But John Lewis was right to condemn some of the hateful rhetoric that John McCain himself personally rebuked just last night, as well as the baseless and profoundly irresponsible charges from his own running mate that the Democratic nominee for President of the United States ‘pals around with terrorists.’

“Pals around with terrorists” is baseless and profoundly irresponsible?  I and many Americans do not agree!

Did Barack Obama work with William Ayers on committees and boards? Yes

Did Barack Obama attain his position as Chairman of the Annenberg Challenge with Ayers blessing?  Yes

Did William Ayers throw Barack Obama a fundraiser (in his living room) to kick off his political career? Yes

There is much more research on these two but you get the idea.  So, this would either make Barack Obama incredibly stupid or incredibly un-American.  Which is it? I already know which, but you decide for yourselves.

Only in “Obama World” do one’s associations not matter.  Americans, by and large, will judge a person’s character on who they associate with, and since Obama has almost no record to speak of, except for voting against the American people or voting “present”, we are scrutinizing his character.  Lo and behold, we are not liking what we are seeing, and because the MSM did not vet this candidate earlier in the form of investigative journalism, Americans are becoming more and more vocal about Obama and his un-American associates.

Obama’s camp wants us to play nice while they just roll right over us with their hope and change rhetoric with nothing to back it up.  Barack Obama has underestimated the true patriotic nature of most Americans.  We do not care what color he is; we care about his character and his judgement, and will stand up and speak to those issues. Americans, by their very nature, are brave and will not back down from something they believe in.  PUMAs have been taking a stand against the Obamanation and the MSM, and now the rest of the country is joining us.  The Sleeping Giant was awakened by the Main Stream Media’s incompetence and biased reporting.

May we just lay the blame for the current vocal hostility of so many Americans, Democrats and Republicans alike, right where it needs to go….the MSM?  Was there not a poll a month or so back that said 71% of Americans believe that the Media was slanting the election toward Obama?  Should not Mr. Lewis make a statement apologizing to the McCain/Palin ticket and all Americans for placing the blame for the anger and frustration on John McCain and Sarah Palin?  Should not Mr. Lewis also state that the Main Stream Media, who has been in the tank for Obama, is the true culprit for creating the frustration, anger, and vocal hostility we see now in so many Americans?  There is a reason why Fox News’ ratings continue to grow, and the rest of the MSM’s numbers are tanking.  If a candidate needs the Media to be so biased towards them, is that candidate worthy of the Presidency?

I thought this was America, not a third world country. 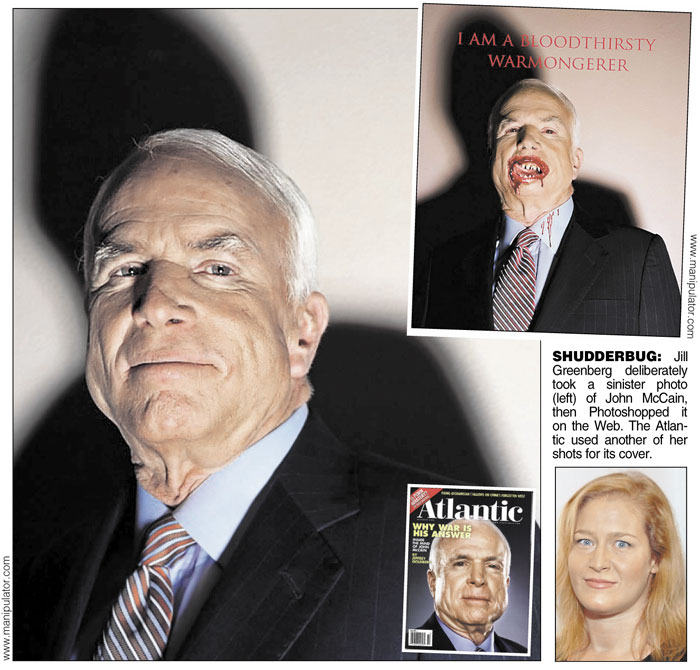 Go here for a perfect example of what I mean.  I found this article on RCP right next to mine.